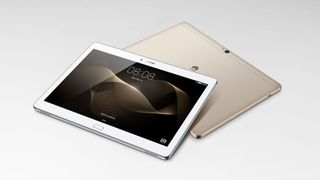 Huawei is out with a new tablet, the MediaPad M2, an Android tablet with some iPad Pro swagger thrown in.

That mainly is thanks to the stylus, provided for precision drawing and writing. It's called the M-Pen, which is somewhat more palatable than the Apple Pencil.

The stylus has has 2048-level pressure sensitivity, Huawei claims, and, in the premium edition, high identification accuracy. We only hope the less accurate stylus isn't too far off the mark.

Its large size and stylus lean it toward the enterprise crowd, though it definitely still has the look of a consumer-centric slate, one of the nicer looking of the Android family in recent memory.

Its specs aren't much to write home about, but the MediaPad M2 has one ace up its sleeve: sound. Huawei partnered with Harman/Kardon for the MediaPad M2's speakers, which will restore lost high-frequency details for a lossless listening experience.