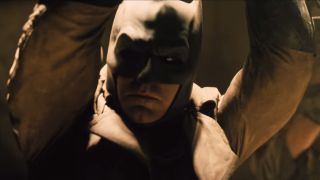 A new teaser trailer has dropped for Batman v Superman: Dawn of Justice, and things are not looking friendly.

While everyone suspects that Supes and ol' pointy ears will be allies by the time Zack Snyder's second dip in the DC cinematic pool wraps, things appear to get off to a decidedly frosty start.

For one thing, Batman and two other unfortunate chaps make their appearance with their hands chained to the ceiling in some sort of underground chamber, in what looks like a desert.

Second, the Man of Steel appears to have guards armed with machine guns guarding said chamber – a decidedly un-Superman-like move.

Third, Superman looks like he's pretty cross about something. Striding towards Batman, Kal-El wrenches the cowl off his head and and then holds it in his outstretched arm, giving it a good sneer.

Bruce Wayne, having been relieved of said cowl, isn't too happy about the situation either.

The most striking thing about this trailer is how awesome Ben Affleck's Batman looks. Although he's wearing some kind of strange desert/camo gear, that cowl is the best version we've seen. It's looking safe to say that Ben Affleck will be the most authentic-looking cinematic Batman yet.

The trailer is a teaser for a longer version that will debut on Jimmy Kimmel Live on Wednesday night. Never before have we so wished we could manipulate time by flying around the Earth really fast.