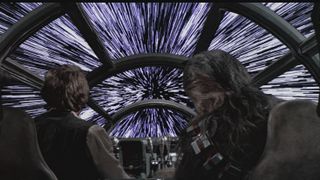 Enjoying our Star Wars Week coverage? We've chosen to republish this feature, which ran just before Star Wars Episode VII: The Force Awakens came out, to remind fans and non-fans alike why the series means so much to so many of us.

The odds of summarizing the collective love of three generations of Star Wars fans into a 1,300-word article for non-fans are 3,720:1, but someone has to try.

Someone has to attempt to explain to thousands why the films about a dead-beat dad, a really weird brother-sister relationship and one colossal laser are worth so much to so many.

They have to try and articulate how you can learn more about courage and standing up for what's right from an old hermit and a little green puppet in six hours than most ethics courses can teach you over a semester in college.

We need a person, who desperately loves the series, to try and concisely convince you why you should give these old films a shot if you haven't ever experienced the joy and heartbreak of the cultural phenomenon that is Star Wars.

I don't know if I'm the man for the task, but all I can do is follow Yoda's timeless piece of wisdom: Do, or do not. There is no try.

A long time ago in a house far, far away…

I watched A New Hope … er, "the first one" for most of us, when I was still learning how to multiply and divide. I watched it on VHS in my pyjamas on a cold, dark night by myself when all my siblings were busy and my parents were out. The only supervision I had was from a wise old kook named Obi-Wan and a scary Sith named Darth Vader.

Back then I didn't understand the symbolism of the Empire or how borrowing the centuries-old hero's journey story arc was an effective way to position Luke as an underdog before confronting him with a moral dilemma between family and his morality.

I couldn't understand why The Empire Strikes Back made the good guys lose, and why that made the end of Return of the Jedi so much sweeter.

All I understood back then was that lightsabers were cool.

If you want the most basic of reasons why some of us like Star Wars, it's because there are laser guns, spaceships and unique monsters that can frighten you (the Rancor or Wampa) or make you laugh. It's not much, I know, but in terms of pure aesthetics Star Wars brings so much to the table.

If you're watching Star Wars for the first time, or are considering watching it for the first time, don't get caught up in the fine details of how Emperor Palpatine somehow climbed all the way to the top of the political ladder in less than two hours, and spend more time looking at the varied environments that never feel underdeveloped. Look at the cities that actually have a history and people…er, aliens...that have their own culture, ambitions and shortcomings. Take a good hard look at it here, because it's actually pretty darn hard to find anywhere else.

But while most of our love for Star Wars starts with aesthetics, it ends with the characters and plot that pervade the series.

It's hard to talk about the characters and plots of the films without ruining any of what makes them so special. I can't tell you what happens to Luke or why he's so pissed off at an eight-feet-tall mechanical man. I guess I also can't tell you why Liam Neeson only made it through one film before getting forced out of the franchise.

What I can tell you is that the original movies follow this guy, a kid really, named Luke. He lives on a farm in the middle of nowhere and isn't really all that exceptional at anything. He doesn't have many friends (unless you count his soon-to-be-deceased aunt and uncle and Biggs Darklighter) and his only goal in life is getting away from where he was born.

Over the course of the next two films you watch Luke struggle to make decisions, often failing with horrible consequences (he loses his hand by the way.) There are other characters, like the roguish Han Solo, with a spotty past, and the feisty, capable leader Princess Leia who are great, too, and in time you'll come to relate to all of them in some capacity. They all exist in what we call the original trilogy.

If you start with the newer trilogy that starts with The Phantom Menace, you'll pick up with two Jedi, Obi-Wan Kenobi and Qui-Gon Jinn, a handmaiden and a boy named Anakin Skywalker. (There's another character named Jar Jar Binks, but just ignore him.)

While the later movies are a tale of heroism and overcoming the odds, the former are about the temptation of power and the lengths we'll go to when protecting the ones we love. There's more there than I can explain in one opinion piece, but the gist of it is that there's good and evil and both will pay a price in blood, loss and anguish before the final credits roll.

So why should you watch it? I mean there are plenty of stories about good vs evil, right?

Star Wars is more methodical than most other stories. It builds up the bad guys by having them win once in awhile, and actually makes you feel like the Rebellion might lose. The situations go from bad to worse, and sometimes from worse to really awful. Minor characters and subplots become major discussion points and before long you'll discover yourself reading a fan theory online before you're holding a comic in one hand and an expanded universe novel in the other.

I guess why we all love Star Wars so much is because like us, it never stopped growing.

Apologies for the Midi-chlorians

Here comes the apology part: If you don't feel this way about George Lucas's films or don't have that sense of curiosity for the universe or get overwhelming nostalgic for your childhood (or whenever it was you saw your first Star Wars), I'm sorry.

I'm sorry you'll never get to experience the same thrill we did when we saw the decrepit Star Destroyer in the first The Force Awakens. I'm sorry you won't be able to make jokes or get the cultural references that the rest of us will continue to make for the next few decades.

But if this explainer-turned-apology letter didn't change your mind about the franchise, that's OK. It's OK not to like something that many other people like. Heck, I've never understood why people liked Elvis so much. I've never seen The Godfather and I haven't read Lolita. So if you choose to make Star Wars your Godfather or Elvis, I understand.

That said, it's also OK to get upset when all you've seen for the past eight months are companies using Star Wars to sell merchandise or interrupt shows and movies you actually like to remind you that there's another film on its way (trust me, we don't like it much either).

But don't let a few bad experiences ruin what could turn into a lifelong obsession with one of the only truly great franchises to survive into the twenty first century.

If Star Wars has taught me anything, it's that there's more good than bad in life. You live in a universe with at least seven billion other people, and even though some of them may seem like strange alien lifeforms, we all generally fight for the same thing: a peaceful place to live.

To that end, if you're looking for something as inspirational as it is action-packed, as thoughtful as it is original, then do I have a series for you.

P.S. If you do decide to watch the films, do yourself a favor and watch them in Machete Order and the original trilogy on VHS. It's worth it.