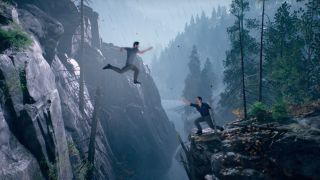 EA reserved its main stage at EA Play for games like Apex Legends, Madden NFL 20 and Star Wars Jedi: Fallen Order, but at a nearby event, the developer-turned-publishing house had a slew of new 'triple-i' indie games to show off.

Among these titles were several new EA Originals – games published through EA, but not in-house at one of EA’s development studios – and include Lost in Random and RustHeart, plus a new co-operative game from Hazelight Studios, the makers of last year's A Way Out.

Lost in Random, coming from Zoink! Games – the developer behind Fe, an EA Original that came out last year – is an RPG-lite game that’s all about embracing randomness. RustHeart, from Glowmade, encourages players to forge an endearing friendship with a courageous robot hero. And Hazelight Studio's new game? Well, apparently, according to Studio Head Josef Fares, "is f****** nuts."

While there wasn't much gameplay shown off for many of these games – most are just going into development – the event showcased EA's smaller developers and how they interact with EA as a publisher.

“The reason we signed with EA is that all the execs played it – and some of them were good at it," said Karthik Bala from Velan Studios, who was there to talk about his studio but not formally announce Velan's forthcoming competitive online game. "From day one, they said ‘How can we help with this?’”

"We are just 12 people developing Sea of Solitude, but the EA machinery around the game's marketing is huge," said Cornelia Geppert from Jo-Mei, a German indie studio working on Sea of Solitude. For small studios, EA is a life raft.

While many of the games talked about at the event sound exciting, a number of them are far from coming to your Origin library – with the exception of Sea of Solitude, which comes out on July 5.

Look-ahead preview events like these offer greater insight behind the scenes of one of the world's largest game publishers. Allowing them to talk about their experiences – as well as give them a spotlight to talk about their new games – is a good look for a publisher that doesn't always get the best press.

The downside here is that we'll have to wait until E3 2020 to hear more about EA's next batch of high-quality indie games.