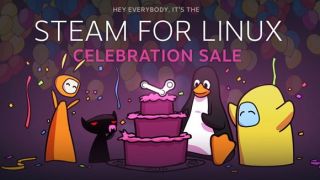 It's been several months since the Steam for Linux beta kicked off in the fall, but on Thursday Valve's digital PC gaming platform finally launched in full.

Tux gamers, so-called after the Linux mascot Tux the penguin, should be jumping for joy right now.

The launch of Steam for Linux is a big deal, as more and more users gravitate toward the more open nature of operating systems like Ubuntu.

Not to mention that more than 50 Steam games on Linux are on sale for 50 percent to 75 percent off to celebrate the official launch.

The Steam for Linux Celebration Sale

Valve launched the so-called Steam for Linux Celebration Sale on Thursday as well, and it will run until Feb. 21 at 10 a.m. PST.

The 50-plus games that are on sale include everything from Counter-Strike: Source to Bastion, and they're all at least half off.

It's like Christmas, birthdays and graduation all rolled into one glorious week-long sale for Linux gamers.

Steam has been snowballing as high-profile personalities like Valve CEO Gabe Newell have expressed their disdain for Windows 8.

Even Microsoft may have taken note, with rumors pointing to the first official Office release for Linux possibly coming in 2014.

And don't forget the reports that Valve's Steam Box living room gaming PC will be a Linux box.

"We expect a growing number of game developers to include Ubuntu among their target platforms. We're looking forward to seeing AAA games developed with Ubuntu in mind as part of a multi-platform day and date release on Steam," he continued.

And another, from Alen Ladavac, CTO of Serious Sam creators Croteam (Serious Sam 3 for Linux is on sale this week as well): "We're huge fans of Linux. It's like the indie OS – a perfect home for our indie game," he said.

"And who better to lead the charge into Linux gaming than Valve? With Steam distribution on Windows, Mac OS, and now Linux, plus the buy-once, play-anywhere promise of Steam Play, our games are available to everyone, regardless what type of computer they're running. That's huge."