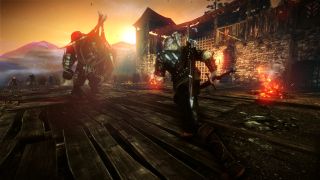 Microsoft has announced a significant change to the way it's going to release its new backwards-compatible Xbox One games.

No longer will it be releasing them in monthly blocks, as it has been doing since it kicked off the project back in November – from now on it will release backwards-compatible games as soon as they're available.

"Rather than having a set monthly launch date," Microsoft explained, "titles will go live once each has received the engineering and publisher stamp of approval".

The final monthly block of games features a full ten new games, including the sword-tastic SoulCaliber and the finest detective duo in the world, Sam and Max.

But the biggest of the new titles is the outstanding The Witcher 2: Assassins of Kings – and you don't even have to own the original to get it up and running on either Xbox One as a backwards-compatible game, or as a native game on the Xbox 360.

Until February 5 (8am GMT) you can download The Witcher 2 for free at Xbox.com, if you live in either the US, UK, Canada, France or Germany. Sorry Australia, the white-haired lothario's second adventure still costs money in your 'hood.

Hopefully, the fact that newly minted backwards-compatible games will be released as and when they're re-engineered for the Xbox One means it won't be long before we start to see some of the games on the wishlist.

Microsoft has confirmed that CoD: Black Ops, Bioshock Infinite and Halo Wars are all in progress, but that's still only three from the top 20 most-requested games on that list.

There's no official word on whether Skyrim or Red Dead Redemption will be getting the necessary treatment, although with Fallout 3 currently topping the list of the top 10 backwards-compatible games at least Skyrim's porting looks likely.