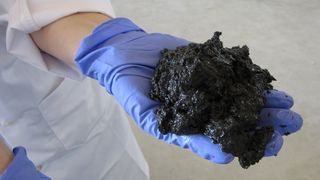 Next time you, er, drop the kids off at the pool, you could be helping to save the planet. Engineers at the US Department of Energy's Pacific Northwest National Laboratory (PNNL) have developed technology that can turn human sewage into crude oil.

The process is called "hydrothermal liquefaction", and approximates the geological conditions that create oil deep underground. By taking sewage and subjecting it to extremely high temperatures and pressures, it's possible to recreate in a few minutes something that takes nature millions of years.

"There is plenty of carbon in municipal wastewater sludge and interestingly, there are also fats," said Corinne Drennan, who is responsible for bioenergy technologies research at the PNNL.

"The fats or lipids appear to facilitate the conversion of other materials in the wastewater such as toilet paper, keep the sludge moving through the reactor, and produce a very high quality biocrude that, when refined, yields fuels such as gasoline, diesel and jet fuels."

Drennan added that the simplicity of the process makes it very practical. "The reactor is literally a hot, pressurized tube. We've really accelerated hydrothermal conversion technology over the last six years to create a continuous, and scalable process which allows the use of wet wastes like sewage sludge."

To scale the technology up, the lab has licensed the technology to a company to build a demonstration plant in the next couple of years in British Columbia. It should open its doors in 2018.

"If this emerging technology is a success, a future production facility could lead the way for Metro Vancouver's wastewater operation to meet its sustainability objectives of zero net energy, zero odours and zero residuals," said Darrell Mussatto, chair of Vancouver's Utilities Committee.

This discovery is just the latest example of alternative uses for what was until recently considered waste.

In 2010, A Peruvian professor showed that it was possible to power an entire town on guinea pig poop. About 1000 guinea pigs produce three tonnes of waste every month, which is sent into a bio-digester to produce organic compost and methane, which is burnt for fuel.

In 2014, a bioengineer announced he was developing 'ecobiotics' that cure diseases using intestinal ecology. By transplanting microorganisms that live in the gut from one person to another, David Berry believes he can treat otherwise-intractable conditions.

In 2015, the Gates Foundation developed a machine that could convert sewer sludge into electricity, fertilizer and drinkable water for use in developing countries. There's even a video of Bill Gates drinking water that had been sewage mere minutes beforehand. Earlier this year, TechRadar writer Andrew Williams wrote a great feature on how drinking water made from human waste could save the planet.

And then there's Nasa, which in 2015 announced it would be giving researchers $600,000 to figure out a way to turn human poop into a synthetic food that could sustain astronauts on deep space missions. That sounds pretty awful, but when you consider that astronauts already drink their own reprocessed pee, maybe it's not that bad?