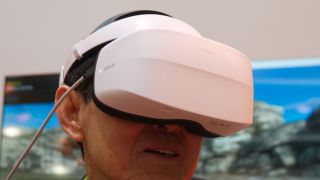 At CES 2018, we’ve had an early look at the Huawei VR 2, the company’s new mobile virtual reality headset. It’s sleek, comfortable, and it can do something that others can’t: show off IMAX content in certified fashion. But that’s not all.

Building upon the first iteration VR headset, the VR 2 has adopted a now-common design to guarantee comfort while playing or enjoying a film in VR for extended periods of time. Like the PSVR and more recently, the Lenovo Mirage Solo, the VR 2 rests just above your forehead and tightens around the back. Any weight that this headset might have gained over the previous model is negated by the fact that it’s so darn comfy.

The ways in which you view virtual reality content has changed, as well. Instead of placing your phone in the front of the goggles to act as its display, the VR 2 claims to have its own 3K display inside. That being said, this isn’t a standalone headset – you’ll need to tether it via USB-C to the Huawei Mate 10 Pro, a tablet or even a PC to power the experience.

During our first look, we experienced two demos: one of which was a IMAX movie clip and the other being an interactive game. The first of which was just a montage of bombastic scenes from recent blockbuster hits that adequately show off the fidelity of the VR 2’s 90Hz refresh rate display. Visuals were crisp and, equipped with DTS compatibility, the sound really rocked.

Moving on to the game, it required a VirZoom, the standing bike made for VR experiences. Playing as a battle tank, pedaling forward moved me and tilting my head to the side turned the tank. While the demo was simple, it put the VR 2’s sensors to task and it was interesting to see a mobile VR headset working with a executable file run directly from Windows 10.

Speaking with Huawei representatives, there is no official price or release date for the VR 2 just yet. However, one did hint that come summer, we should have a better idea.

In terms of software compatibility, Huawei ensured me that it’s working to build up its own library of game titles and experiences. Additionally, it’s said to work with Steam and Google Daydream, which is encouraging for those who want access to a more robust library of games. We look forward to testing this one out closer to its release.