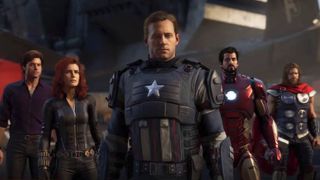 With great power comes great responsibility and being handed the reigns to adapt 'Earth's Mightiest Heroes' for a videogame is certainly something which brings with it a lot of power. Therefore it's no surprise that, when it comes to Marvel's Avengers game, developer Crystal Dynamics is taking its responsibility very seriously.

After all, the studio is taking on a comic book series with almost 60 years worth of history including a successful film franchise, several animated TV series' and a variety of spin-offs. It's no small feat and the developers are under no illusion of the torch they've been passed.

Following a behind-closed-doors demo of Marvel's Avengers at E3 2019, we sat down with creative director Shaun Escayg and lead combat designer Vincent Napoli to talk about the superhuman task they've undertaken.

Holding out for a hero

Marvel's Avengers game is a total original story in collaboration with Marvel itself which blends cinematic visuals with single and co-operative gameplay.

The story begins on A-Day in San Francisco, a holiday to celebrate the Avengers which, in this iteration, is made up of Hulk, Thor, Iron Man, Captain America and Black Widow.

The Avengers have recently harnessed a new technology that sees them merging with S.H.I.E.L.D., the special law enforcement and counter-terrorism agency that tends to deal with superhuman threats - tensions are high. However, the celebration is interrupted by Mr Motivator's overly-eager brother Taskmaster and his goons who have stolen the new technology and are using it to wreak havoc on San Francisco and the Avengers themselves.

In an effort to stop Taskmaster, the Avengers fall right into his trap and ultimately end up being held responsible for the destruction of the entire city and, to boot, Captain America lost his life in the incident.

The story picks up an unspecified amount of time after and follows the former Avengers as they each deal with survivor's guilt and the question "are the Avengers a force for good or destruction?" With papa Cap not around to referee, tensions are at an all time high among the group.

But this isn't simply going to be a case of rooting for the 'good guys'. Crystal Dynamics is choosing to explore all aspects of the fallout from the A-Day incident - allowing players to see things from both the casualty and hero perspective so you can "have that debate" for yourself.

To do that, the game will see players stepping into the shoes of each individual Avenger, to see how they coped following the incident.

This overarching, strong narrative applies to the single-player campaign but serves as the "set-up" for Avenger's co-operative mode.

"It's almost like a TV series," Napoli explains. "You have one major plotline happening and then all these mini threads start to be created and that's where you get the freedom to have up to four players so you can delve into each of the side plotlines."

The hero you're born to be

Arguably the biggest obstacle when converting a franchise with a loyal following into a game is the expectation. Fans will always have in their head a picture of how they think an Avenger would move, speak, look and, more importantly, play.

Capturing that superhero feeling is almost always going to be a losing battle because you will never please everyone. Since the Avengers game trailer was revealed there have already been critiques of the voices and looks of the heroes. While the faces are sometimes a bit janky, there's little denying that many of the cinematics are stunning. But it's still difficult to accept veteran voice-actor Nolan North (aka Nathan Drake from Uncharted) as Tony Stark, because he's not Robert Downey Jr.

Crystal Dynamics knows this obstacle all too well and have therefore opted to create combat specific to each hero. A lot of this was due to the insistence of Marvel that each character's mechanics felt like it could "be their own game".

"There's a lot of expectations coming off of the movies where people think these characters are who they are and how they look. We drew from the 80 year history of Marvel: guided by them, challenged by them and it's a great collaborative to have because they give us the freedom but they're also the gatekeepers. For us, it was about how do we keep our narrative, put our spin on it but also really have the player partake in being an Avenger."

There are many iterations of the individual Avengers, alternative versions with varying abilities, backstories and looks. That's something the developers want you to be able to explore, allowing players to unlock and customize the abilities of each Avenger for the play style that suits you.

"It's about you playing that hero they way you want and playing that fantasy out," Escagy explains. "That is the goal."

"We want to be like 'here's our Thor' but also let you customize him and create your Thor," Napoli adds.

With the Avengers films officially done and dusted, at least for a while, Marvel fans are eager for some more superhero goodness. The Marvel Cinematic Universe proves that the intertwining of individual superhero's stories is something which fans love, having invested over a decade watching each individual MCU film before the epic conclusion in Avengers: Endgame earlier this year.

During the official reveal of Marvel's Avengers game, it was revealed that all the game's future hero DLC will be completely free.

"The important thing is to assemble," Escagy explains when we ask about the motivation behind this decision. "To play with your friends as the Avengers, it is the DNA of what we're making. We don't want players to play-to-win or play with their friends or to play their favorite character, this is about you experiencing an Avengers dream."

"The characters we're introducing, they're very much picked by the narrative and driven by that," Napoli adds. "We want people to continue with that narrative, we don't want to be excluding anyone."

This focus on narrative and intertwining character stories has us thinking a Marvel Game Universe could be on the cards.

"We didn't say it," Napoli laughs when we ask whether this could be the case.

But what about the man behind the franchise? What did he have to say about all this? Stan Lee passed away in 2018, when development on Avengers had already started.

Escagy and Napoli were unsure whether Lee had ever seen or played the game before his death but do not fail to recognise Lee's importance.

"This entire game is a tribute to Stan," Escagy tells us. But does that mean we'll be seeing him making a famous cameo?

"You'll just have to play the game to find out," Escagy smirks.