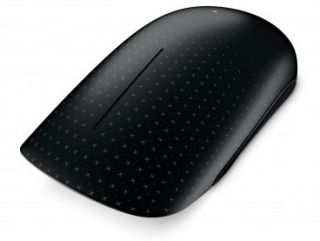 The Windows Touch Mouse gives us some clues about Windows 8

Microsoft's new Touch Mouse is a lovely piece of design in its own right.

It's a comfortable wireless mouse that's great for just about any size of hand, works on literally any surface thanks to the BlueTrack optical technology and gives you the best of a mouse and trackpad combined.

But it's also a clue to the gestures we expect to see in Windows 8.

In the three years that the Microsoft hardware team has been working on the Touch Mouse - they had a prototype a month before Apple announced its own multitouch mouse - they've worked closely with the Windows and Surface teams and it shows in how well the gestures work with the Windows 7 features like Aero Snap and Aero Peek.

But when Microsoft UK showed us the mouse again this summer, they let slip that these are gestures we'll see again in Windows 8.

The simplest, most useful gesture is the one you've never seen on a mouse or a trackpad before but you use it all the time on a touch screen; swiping sideways with your thumb to go forward or back. Use it to browse through a gallery or photos, to skip back a page in your Web browser or you navigate up and down through folders in Explorer.

In the Windows 8 touch interface demos we've seen swiping gestures switching running applications when you start at the left edge of the screen,bringing up a settings panel when you swipe from the right and opening the Windows Phone-style menu when you swipe up from the bottom.

But this could be a gesture you would use inside applications, like the Flicks that Windows 7 has, and it could work as well on a touchpad on a notebook as well as on a tablet touch screen.

Mac OS X Lion MacBooks and Synaptics touchpads on recent Windows notebooks have a swipe gesture that takes you back and forward in a similar way, but it takes three fingers; swiping with your thumb feels much more natural.

Use two fingers on almost any touchpad these days (including Lion) and you scroll through the current window. You only need one finger to make that work with the Touch Mouse. Swipe down with two fingers here and you minimise the current window; swipe up again and you restore it to the original size.

Swipe up a second time - or start by swiping up - and you maximise that window - swipe down again to shrink it back down. Lion has a pinch gesture for making a window full screen or restoring it, but that only works in Quick Look.

Swipe two fingers left or right across the Touch Mouse and that snaps the current window to take up the left or right side of the screen with Aero Snap; it's like you're pushing the window to where you want it to go.

PRACTICE MAKES PERFECT: The practice interface shows how simple the gestures are

In the Windows 8 touch demos we've seen a tablet version of Snap that lets you split the screen into two different sized windows. That works on Windows 8 without a touchscreen, but involves holding one finger on the touchpad while you slide a second finger – kind of fiddly.

If Windows 8 lets you two-finger swipe left and right in the desktop view for classic Aero Snap and in the tablet view for this split-screen view it would be almost as fluid as using a touchscreen.

Control the desktop with three fingers

Swipe down with three fingers (or four, it doesn't matter at this point) and you minimise all open windows and show the desktop – the Windows 7 Aero Peek feature you can also get by clicking at the end of the taskbar. Swipe up with three fingers and you get an Expose style set of thumbnails of all your open windows called Instant Viewer. We love this and we're hoping we get it in built in to Windows 8, as well as the endless swipe to switch tablet apps one at a time.

SHOW ME: Far better than the Windows task switcher, this is the Instant Viewer we want to see in Windows 8

Once you get into Instant Viewer, you can use one finger to move between the windows to pick the one you want and tap to select it; much faster than Alt Tab or Windows Tab. Combine the two and three-finger Touch Mouse gestures and you can move between windows so fluidly it feels a bit like mind control.

Snow Leopard introduced a four-finger gesture that's similar; swipe down to open Expose, swipe up to get the desktop, swipe sideways to open the Application Switcher; then you can use two-finger scrolling to pick a window.

All of this works brilliantly on the Touch Mouse because it has a sensitive multi-touch capacitive surface, like a trackpad wrapped around the mouse body.

You can think of a lot more gestures than these; Microsoft didn't add more to stop the mouse getting confused about what you're trying to do, but coders will be able to make their own gestures when the Touch Mouse API comes out; students who enter the Innovation Contest at the ACM Symposium on User Interface Software and Technology in October get to try that out early.

All of these gestures would work just as well on a multitouch trackpad on a Windows 8 notebook and we're hoping they'll be in the OS as standard. They would also work with a touchscreen that detected four touch points rather than just two; we don't know if that will be the spec for Windows 8 tablets but if it is, Microsoft could put much more powerful gestures on tablets than just swiping, tapping and pinching.