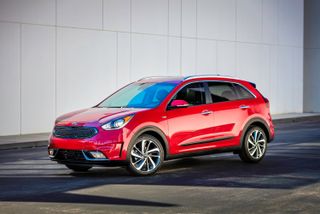 Kia globally debuted its production Niro hybrid crossover at the 2016 Chicago Auto Show, after many months of sketch-teasing. The Niro debuted in concept form in 2013, as a glimpse into Kia's eco-conscious future, with production teaser sketches releasing prior to the Detroit and LA Auto Shows.

Sculpted as a crossover utility vehicle (CUV), the clever folks at Kia decided the Niro needed a new marketing classification: hybrid utility vehicle (HUV), because CUV wasn't specific enough. The Niro is Kia's first hybrid vehicle engineered from the ground up with a dedicated Eco-Car platform.

Despite being a hybrid, the Niro looks like a regular subcompact CUV, which is what I find most attractive. Unlike the Toyota Prius and Nissan Leaf, which have outlandish styling that screams "look-at-me, I'm environmentally friendly!" the Niro lets you have the hybrid fuel-economy without blatantly telling the world about it.

Powering the Niro is an all-new powertrain consisting of a Kappa 1.6-liter direct-injected four-cylinder engine joined by an electric motor mated to a second-generation six-speed dual-clutch (DCT) transmission. The electric motor is powered by a 1.56 kWh lithium-ion battery placed beneath the rear seat.

Altogether, the powertrain produces 146 horsepower and 195 pound-feet of torque. Kia is targeting a combined 50 mpg, which is shy of the 2016 Toyota Prius' 52 mpg (56 mpg in the Eco trim). I'm willing to give up some fuel economy for conventional styling, however.

Kia plans a plug-in electric hybrid version of the Niro later in its life-cycle, too.

There's one downside with the Niro: it's only available in front wheel drive, which is very uncrossover-like and makes it more like a hybrid Kia Soul than a smaller alternative to the Toyota RAV4 Hybrid.

Also joining the Kia hybrid lineup is the revised 2017 Kia Optima Hybrid and PHEV. While the regular gasoline Kia was all-new for 2016, the hybrid version carried over unchanged.

A larger 1.62 kWh lithium-ion polymer battery pack provides more electric energy than the outgoing model. Altogether, the hybrid powertrain produces 193 hp, which is down from the last generation's 199hp.

Kia doesn't mention the expected fuel economy numbers, but its corporate cousin, the Hyundai Sonata Hybrid with the same powertrain, received an Environmental Protection Agency (EPA) rating of 40 in the city and 44 on the highway. I predict the Kia Optima won't be too far off from those numbers.

Just plug it in

A plug-in hybrid electric (PHEV) model joins the Optima line-up for the first time, too. The PHEV has the same 2.0-liter four cylinder and six-speed automatic transmission, but upgrades the electric motor to a 50 kW unit that can motivate the Optima with pure electric power.

Kia doesn't disclose the combined power output, but its platform mate, the Hyundai Sonata PHEV, produces 202 hp from the same powertrain, so I expect the same from the Optima PHEV.

Mark your calendars: The 2017 Kia Niro HUV, Optima Hybrid and Optima PHEV will arrive in dealerships later this year.