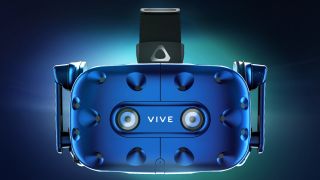 Although Oculus is also producing high-end VR devices, and Sony's PSVR offers a budget-friendly VR experience for gamers, HTC is still one of the top (if not the top) contenders in the virtual reality stakes.

They're especially good if you have the extra elbow room to set-up full room-scale tracking at home too rather than being confined to a tiny space or having to move all your furniture round every time you want to step into a virtual reality.

Although they have some similarities, the newer HTC Vive Pro headset bumps up the display resolution to 2880 x 1600 pixels. This serves up extra-crisp imagery, and the built-in headphones provide even more immersion. But having said that, both these headsets are great buys.

They also enable you to play many of the best VR games currently on offer, which is why we've created this post to give you the skinny on which are the best for you.

Although VR gaming may have had a sluggish start, there's now no shortage to choose from – from experimental indie games, to classic game genres like the first-person shooter adapted for VR, to major ports of Triple-A titles.

Some of the HTC Vive games are better than others, however, so we’ve taken the time to pick out the best of the best, so you can just jump right in and start enjoying your headset and not waste time on low-quality gaming experiences.

Here are the best available games for HTC Vive and HTC Vive Pro right now, as well as a few upcoming games that you won’t want to miss.

To put it simply, Beat Saber is what it would be like to be a Jedi sucked into Tron to play Dance Dance Revolution. If that sounds like a wild amalgam, that’s because it is: Beat Saber has players slashing with lightsabers to a musical track. Neon is everywhere, and blocks and obstacles fly at the player, requiring rhythmic slashing, expert saber manipulation and careful dodging throughout.

Although it was in an early access state for a long time, Beat Saber continues to garner “Overwhelmingly Positive” reviews in Steam. The game comes with music tracks and levels made by the developers, but for gamers that want a bit more variety, mods support custom tracks and levels

You may have visited Skyrim many times before, but there’s something a little bit special about your first trip in virtual reality.

Released just a couple of days before the Vive Pro launch, Skyrim VR feels poised for the improved resolution the headset offers, and its increased comfort means it’ll be easier to explore for longer.

This is the full Elder Scrolls: Skyrim experience, including DLC, so if you’re looking for long-term immersion, you’ve found it.

Created to help Vive newcomers understand just what their headset is capable of, The Lab is to be recommended.

It brings together a host of mini games set within the Aperture Science universe. You’ll do everything from fixing a robot to defending a castle – it’s a fantastic introduction to the range of experiences you can have in VR and, best of all, it’s completely free.

First released in 2011, LA Noire has had something of a resurgence with its Nintendo Switch and VR release.

This isn’t the original game in its entirety; rather, it’s a version of it specifically built for VR. You’re placed in the well-shined shoes of Detective Cole Phelps and it’s your task to solve seven cases from the game.

You can search for clues and pick them up to inspect them, write in your notebook, drive your car and interrogate witnesses all with the increased immersion offered by VR.

Now might be the best time to drop yourself into the wide, gorgeous and often terrifying expanses of the Wasteland of Fallout 4.

You need a powerful PC to get this game looking its best but the immersion is unbeatable. And with the improved resolution of the Vive Pro, you’ll notice all the interactive objects in the world even more.

If you’ve played Fallout 4 on any other platform and you left a fan, it’s worth trying it here again for an entirely new way to play. Just don’t scream too loud when a feral ghoul gets you from behind.

Fast and brutal, Thumper is a rhythm action game quite unlike any other. It’ll have you swearing never again before you go back for one last go against the latest boss.

Despite how difficult it can be, though, it’s excellent, and its thumping electronic soundtrack with its fast, colorful and trippy world are well-suited to the resolution and headphones of the HTC Vive Pro.

Tilt Brush isn’t a game so much as an experience, but it’s one we think will be very enjoyable on HTC Vive Pro.

With Tilt Brush, you’re given the space to draw whatever you like in the three-dimensional world around you. You can paint with everything from neon light to fire in a wide range of colors, which should make the Pro’s resolution really pop.

Ever wanted to pilot your own space ship? Well here’s your chance.

Elite Dangerous is a sandbox space exploration game, so you’ll have to do a fair bit of grinding and be willing to create your own story, which is far from an experience for everyone.

However, if you’re up to the task, as a reward you’ll get a graphically gorgeous journey through space, enhanced by the immersion of a VR headset.

If you’re a fan of contemplative puzzle solving then The Talos Principle VR may well be the game for you.

Throwing you directly into a game world filled with puzzles to solve, this game is visually impressive and extremely polished.

To really make the most of the Pro’s visuals you can also use the wide range of in-game color options which include sliding scales for brightness and contrast.

More than any other genre, horror is really capable of showing what virtual reality can do, and Paranormal Activity is an excellent example of that.

Based on the popular film franchise, this game puts you in an innocuous but abandoned suburban home with nothing more than a flashlight and a very real feeling that you’re not alone.

The VR mode of the game has no direction and no heads up display - you’re allowed to completely immerse yourself in the game world, for better and worse.

With scares being randomly generated, you never know what’s coming next. This game is a perfect example of the need for built-in headphones on VR headsets – the sound is a big part of the scare.

The Gallery: Call of Starseed

This game is a must for fans of dark 80s fantasy films. Built from scratch for VR, The Gallery is a puzzle-based exploration game that takes you on a fantastical and unnerving journey to find your missing sister.

Hailed as one of the most visually impressive and detailed VR games out there, you’ll be glad for the Pro’s increased resolution, and its positional audio will be a treat with the headset’s new built-in headphones.

Budget Cuts is one of the newer titles here, but already seems to be something of a classic for fans of VR and stealth. Budget Cuts has players sneak around an office and take out robots as needed.

Near Corporation has come up with a pretty clever mechanic for moving around in VR with this title: players shoot out of a portal, which they are able to look through before committing to the movement. This portal, combined with some room-scale, gives players a lot of ways to get around, sneak up on robots, and surprise them with a quick knife.

Originally only available for the PSVR, the far too short but exceptionally good Batman VR game can now be played on the HTC Vive. You're Batman (because of course you are) and you have to solve mysteries, find clues and take part in challenges around Gotham. It's extremely atmospheric, well made and at times surprisingly creepy. It may be on the short side, but it's still one of our all time favourite VR experienced and a great one to show VR beginners what they've been missing out on.

Ubisoft will soon be offering VR gamers a proper frag fest in space in the upcoming Space Junkies. The game will have players drifting and jetting around in space, collecting an arsenal ranging from pistols to explosive arrows to try to blow away other players.

Ubisoft has continued to show a surprising amount of interest in VR compared to other major developers and publishers, having put out Eagle Flight and Star Trek: Bridge Crew. Both of those have been impressive VR games, and with any luck, Space Junkies will turn out to be another one. The game was due to arrive this year, but has now been pushed back to 2019. Although you can sign up for the Space Junkies beta now.