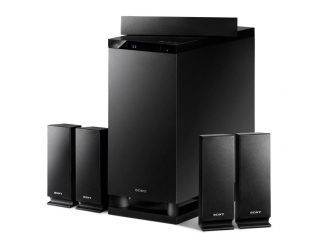 Sony has released a new 3D-ready surround sound system for those early adopters out there keen to invest in one of the first 3D TVs out on the market this summer.

The new Sony HT-AS5 is described as an ultra-compact system with 3D HDMI pass-through and high-power S-Master amplification.

Which basically means it will make your new 3D Bravia TV sound exactly as its manufacturer intended, when you are enjoying those new 3D Blu-ray movies that should be on the shelves very soon.

"Sony makes 3D plus great surround sound simpler than ever with the arrival of the HT-AS5 - designed to give room-filling audio - without filling the room with audio equipment," reads Sony's release just in.

"The system has 3D pass-through on HDMI, and features 1000W of S-Master digital amplification hidden away in its compact subwoofers, which also acts as the control centre for the system."

If you are going to buy a 3D TV soon and if you fancy playing some of the new 3D-ready PlayStation games that are already starting to appear on Sony's PlayStation Network (PSN) then this new 3D-ready audio set-up could well prove to be a wise investment.

Providing you have understanding neighbours, that is…

The recommended retail price of Sony's new HT-AS5 is £429.99, although if you shop around you should be able to find it cheaper.