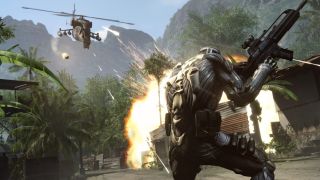 AMD’s Threadripper 3990X has been breaking world records for CPU performance, and impressing us even before its release, and here’s another major feat achieved by the mighty chip: it can run Crysis just on its own.

That means the Threadripper 3990X is capable of playing the game in a system without a graphics card – with no GPU to hand at all – running Crysis in software mode. In other words, directly on the CPU.

As discovered by Linus Tech Tips and highlighted in a YouTube video which you can see below, this exercise isn’t at all practical or particularly useful in any real sense, but it does serve to illustrate the sheer power of AMD’s new high-end desktop chip.

Now, while Crysis doesn’t run all that smoothly when solely driven by the Threadripper 3990X – and it has bouts of serious jerkiness, or even mini-freezes from time to time – the fact that it runs at all, and is just about playable enough to successfully shoot some enemies, is very impressive.

CPUs and GPUs are designed in very different ways, with graphics cards built specifically to have the muscle to handle the millions of simultaneous calculations (using lots of relatively weaker cores) needed to run a game – and CPUs very much aren’t (with far fewer, more powerful cores).

But the sheer performance grunt and not inconsiderable amount of cores on tap with the 3990X means the processor can make a decent fist of running Crysis, via software mode in completely unoptimized fashion.

Linus observes that the game is certainly more playable than ‘last time’, referring to when he ran Crysis on a beefy Epyc chip (one of AMD’s server processors).

As we mentioned at the outset, AMD’s Threadripper 3990X has already set a load of fresh world records, six of them in fact, with its 64-cores being overclocked to a staggering 5.5GHz (which would help a little with that smoothness in Crysis too, no doubt).