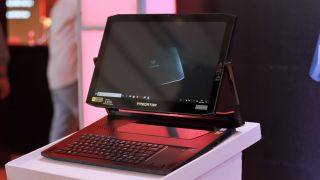 Acer is a household name in the PC gaming space with its high-end Predator series and the budget-friendly Nitro series. At an event in Mumbai today, Acer expanded its Indian product lineup with 8 new gaming laptops, streaming devices and monitors.

The top of the line model is the Acer Predator Triton 900 which brings a futuristic hinge that can be rotated independently of the display and can thus be propped at any angle facing either of the sides. That’s a 17.3-inch 4K IPS panel with support for G-Sync that can be floated over the keyboard for a immersive experience, traditional notebook mode and even a stand mode for using it as a  touchscreen or for content creation.

Internally, the Acer Predator Triton 900 is powered by an 8-core 9th Gen Intel Core i9 processor that can Turbo up to 5GHz along with the new Nvidia RTX 2080 GPU and up to 32GB of DDR4 RAM. There are two 512GB M.2 NVMe SSDs in a Raid 0 configuration, a full-sized mechanical keyboard with a NumPad with per-key RGB lighting and additional macro keys and a custom-engineered 4th gen AeroBlade cooling technology while still being reasonably slim at 0.94-inches.

Next up is the Acer Predator Triton 500 which aims to be a compact gaming powerhouse bringing an 8th Gen Intel Core i7 processor and Nvidia RTX 2080 Max-Q GPUs to a form factor that is just 0.25-inches thick and weighs about 2 kgs. The display is a 15.6-inch panel with a FullHD resolution and 144Hz refresh rate. Pricing starts at INR 1,65,999.

The Acer Predator Helios 700 has the most futuristic design of the lot, with an entire keyboard that slides out allowing for better air circulation and uncovering two additional air intakes. Not just that, it also houses two AeroBlade fans, five copper heat pipes, a vapour chamber and CoolBoost. Internally, the Helios 700 has a 9th Gen Intel Core i9, Nvidia RTX 2070 or 2080 graphics, and up to 64GB of RAM. The base variant is priced at INR 2,49,999 and will be available next month onwards.