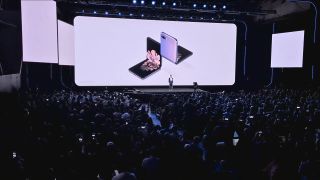 Now that Samsung Unpacked 2020 is over and all the presents have been opened, we can take stock of what was officially unveiled today – not just in devices, but services and other announcements, too.

Today’s event was mostly about revealing the Samsung Galaxy S20 phones to the world and ushering yet another year of mobile technology achievements. But there was a lot more to discover than just new phones.

Below, we’ve listed the most interesting things we learned from Unpacked 2020. Sure, we’ll start with the big handset news – or rather an angle on it – and go from there.

While most trumpeted features in the S20 line is universal 5G – all phones will be available in 5G and, if you’re outside the US, 4G versions of the main and S20 Plus phones. Yes, that’s right – consumers in the American market won’t have a choice but to buy a 5G-capable version of these phones.

That’s fascinating: whether it's carriers or Samsung itself, you won’t be able to buy a 4G-only phone in the US, which feels like a distinct choice to push the US market toward embracing and using 5G networks.

New phones are a great bellwether to determine network readiness. In this case, the Samsung Galaxy S20 Plus and Samsung Galaxy S20 Ultra are both compatible with mmWave and lower-frequency (presumably sub-6) 5G networks. Which means, unlike last year’s Samsung Galaxy S10 5G, new 5G-capable phones won’t have to pick just one type of network for compatibility.

This should help 5G adoption, and support networks that are branching out to multiple frequency bands. While mmWave is fast, it broadcasts in a very narrow area, often just a few blocks from the receiver. Sub-6 frequencies don’t provide as high speeds, but they do expand across a broader area, which is great for suburban and rural regions that aren’t densely populated.

While we like the possibility of unfolding regular-sized phones into nearly phablet-width displays, there’s something to be said about making a handset that compresses instead for folks with small pockets or bags. The Motorola Razr had obvious nostalgic opportunity to trade on its iconic namesake, but Samsung throwing its hat in the ring with clamshell foldables is a big endorsement of their market viability.

The Samsung Z Flip even seems like it will shore up some of the Razr’s weaknesses, with a bigger battery, larger interior screen, glass display, Android 10 in the box, and – crucially – a lower price tag (if just by a bit). This isn’t a slam to the Razr as much as excitement that this format may stick around.

Uh...what? This was one of several blink-and-you’ll-miss-it announcements during Unpacked. Samsung director of strategy David Park mentioned the company was collaborating with Microsoft on a “premium cloud-based game streaming experience”.

This sounds a lot like Microsoft’s Project xCloud, and a spokesperson from the software giant confirmed to CNET that this partnership was an important step in the game streaming service’s “journey”. Given we saw xCloud work on smartphones at E3 2019, we wouldn’t be surprised at all if the Samsung Galaxy S20 phones were some of the first to feature the service. In any case, we’ll hear more about this pairing later in 2020.

Samsung Galaxy phones will get access to extra content on Netflix, an executive from the streaming service said on the Unpacked stage. Specifically, they’ll be from popular original series like Narcos, Elite and the comedy team Netflix Is a Joke.

Some of it will be shot on the new Samsung S20 phone, which is neat, but you’ll only be able to access it through Samsung Daily and Samsung Channels, which is less neat. Oh well, content is content.

6. The Samsung Galaxy S20 line will be the first non-Pixel phones to get Live Caption

Another easily-missed announcement: the Samsung Galaxy S20 phones will be the first non-Pixel phones to get the highly-coveted Live Caption feature. The feature works as described, captioning video and audio without delays.

Given this feature just migrated from the Google Pixel 4 back to other phones, it’s impressive (if unsurprising) that Samsung’s flagships will get the feature before any other Android phones.

Now that the Samsung Galaxy S20 has officially debuted, we can believe what the rumors were saying: this generation of the company’s flagships won’t pack headphone jacks. And, presumably, they might never have them again.

Given most other brands have long since ditched the 3.5mm port in their flagships, this might be the final twilight of the humble headphone jack. Pour one out for the audio purists.

8. This might be the last year flagship phones cost under $1,000

Yes, the $1,000 threshold is arbitrarily American given the variable costs in other regions, but the line seemed significant years ago as smartphones slowly pushed minimum price tags toward ever-higher ceilings. But with the baseline Galaxy S20 starting at $999, we’re probably at the last year before we break into $1,000-and-up territory.

Again, it’s arbitrary – the S20 will retail for a baseline £799 in the UK and AU$1,349 – but that $1,000 level represented some upper limit on rational phone prices. With the debut of foldable phones like the Samsung Galaxy Fold, which costs about twice that baseline S20 price tag, it seems like the gates are open to surpass thresholds and expectations.