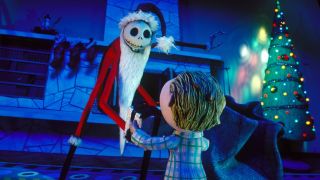 The best alternative Christmas movies are essential for your sanity. There's only so long you can watch the Love Actuallys and Elfs of the world before it feels like the holiday season has been violently sick into your eyes with the sting of emotional manipulation.

And it doesn't take much to turn the Holiday season to a much darker time of year. If you've ever noticed how ominous Christmas music actually is, then you might have already imagined what would happen if Santa took his sleighing a little more literally.

The below list is a collection of the ultimate alternative Christmas movies. Of course Gremlins is there with its monstrous mayhem, but there's far more to Holiday horror than just some furballs you can't feed after midnight. Zombies, psycho Santas, murderous snowmen, and sing along show tunes make this an essential Christmas watch list. Did you hear that? Was it bells? Better check. We'll be right back..

Babysitting is meant to be easy. You get paid to sit in someone’s house and eat everything you want from their fridge. You’d think this would be even better with a larder of festive fare. Unfortunately for Olivia DeJonge’s Ashley, things just don’t work out that way when some unexpected company rocks up. Unpredictable, darkly hilarious, and unexpectedly violent, Better Watch Out deftly subverts your slasher expectations. Perhaps not one to watch when you’re, err, Home Alone. Marv and Harry are the least of your problems.

Tim Burton and Henry Selick’s stop motion winter wonderland might be aimed at children but there’s no denying that Christmas tree eating snakes and gift wrapped shrunken heads are true nightmare fuel. Jack and Sally effortlessly birthed a whole generation of new goth kids back in the 90s and this is still a musical masterpiece packed with festive earworms, all wrapped around a happily beating holiday heart. No Jack, that will never make a present…

The most important thing to say about this festive, well, slay ride is to make sure you check the release year (twice, of course). Where 1998’s Jack Frost will give you a saccharine Michael Keaton flick about a man getting a second chance with his son as a snowman, the 1997 version is a pun-packed B movie where a serial killer finds himself, quite literally, on ice. It’s enough to put you right off Olaf and the rest of his carrot-nosed pals.

With one of the best horror taglines of the 21st century - ‘You brought them into this world, they’ll take you out’ - The Children is one of those rare, brilliant movies that doesn’t treat under 10’s like tiny gods and goddesses. Instead, it infects them with some kind of murderous infection and a family just trying to have a nice snowy Christmas retreat end up having to desperately defend themselves. It’s unnerving, nasty, and absolutely what you came here for.

Aaah, Christmas Eve. A time of loving, giving, and wishing Google Maps had been invented already. When a family head home on their normally routine drive, instead of a happy jaunt with Chris Rea ringing in their ears, their journey becomes a fast track to hell when they get lost in the woods. The simplicity of Dead End is its real draw. We all know what it’s like to feel lost so when things start to go wrong here, it’s all the scarier.

If you’re short on time but still want to hit all the holiday horror tropes in one fell gingerbread-flavoured swoop, you could do a lot worse than this scary anthology flick. It’s all here; Zombie elves, snowy changelings, a grand Krampus Vs Santa showdown, and an eggnog swilling radio DJ played by William Shatner. Surprisingly well-written and often comically gory, this happily puts the ho ho ho in horror. Oh, and did we mention the zombie elves?

The oddly festive and morally reassuring aspect of video nasty Christmas Evil is that this unhinged Santa has at least made a list of who is naughty or nice. However, unlike regular St Nick who might pop a piece of coal in a stocking as a warning, wannabe Mr Claus Harry Stadling decides to viciously murder those who have been misbehaving. But hey, let’s focus on the fact that the good children get toys and not on the completely deranged man with a stick on beard. Yaay.

It’s movie trivia time. Also known as Deadly Games and its original French title of 3615 Code Père Noël, Game Over is a psychopathic Santa movie with more than a pine-scented whiff of Home Alone as a young boy sets a series of horrific traps to defend his elderly grandfather. Director Rene Manzor even went as far as to attempt to sue Fox for the similarities to his movie. This version definitely isn’t for children but does make a perfect violent delight once the mince pies have been left out for a less-murderous man in furry boots.

Some movies can only dream of attaining cult classic status. And then there's Anna and the Apocalypse which effortlessly blends zombies, Glee when it was good, the West of Scotland, and the most wonderful time of the year like a perfect festive latte. This is the best alternative Christmas movie you've never heard of with joyous musical numbers, a true heart, and a wake up in the zombie apocalypse scene which might just beat Shaun of the Dead's with its own cricket bat. True festive joy. Miss this at your spurty, gory peril.

What if Santa wasn’t nice? What if he wasn’t a jolly, rotund chap who just wanted to bring joy to the world? What if, in fact, the legend came from a much more disturbing place? Well, it’s time to take a trip to Finland for some seriously dark comedy horror to find out more. When a research team dig too deep into a mountain, something is unleashed that really doesn’t care much for reindeer. Or, indeed, children. This is the horrific festive treat you just didn’t know you needed.

Christmas is a stressful time. The family are rude, no one says thank you for your thoughtfully considered gift, and your brother manages to wake up Krampus and his army of killer gingerbread men when he rips up his letter to Santa in a rage. From Trick r Treat director Michael Dougherty, Krampus is an effortless and often genuinely scary horror comedy that happily juggles the family drama of the festive season with murderous monsters and possessed Jack in the boxes. And, once again, Toni Collette is brilliant.

It's probably already part of your essential festive viewing while wearing your (dry clean only) knitted Mogwai Christmas jumper but Gremlins delves deep into the darker side of holiday entertainment, making it a perfect alternative Christmas movie. Tiny violent monsters are only part of the deft comedy scares at work here. Dead fathers in chimneys and lethal chairlifts make for devilish horror that you can't help but feel like wouldn't make it into more innocently rated movies today. Just be aware that younger viewers might not cackle throughout like Spike in the same way as you.

Ignore both the remakes. This sorority house slasher is still the best Christmas horror movie to make the festive season even redder than usual. As sets of Scream Queens go, few are as iconic as Margot Kidder’s brilliant Barb, and Olivia Hussey’s quieter Jess. The murder is still brutally unnerving - as it should be, even 45 years on - but it’s the phonecalls that will send chills down your spine as a voyeuristic predator lurks within a seemingly safe home decorated happily for the holidays. Merry Christmas…