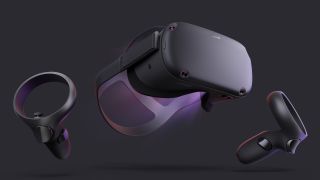 The Oculus Quest VR headset will get hand tracking through a firmware update in 2020, it was announced at this year's Oculus Connect 6 conference.

Facebook CEO Mark Zuckerberg took to the stage in San Jose, California on September 25 to make the announcement, saying that hand tracking would be coming to the Oculus Quest next year.

"As soon as we made [touch controllers] possible it opened up this bigger question which is, ok, how can we do even better – how can we make it so that instead of having to use our hands in controllers, we can just use our hands."

"No controllers, no buttons, no external sensors – just the full range of motion in your hands."

As Oculus seeks to push for more widespread VR adoption, removing the physical hardware barriers from the immersion of the experience – removing trailing cables, the need for a high-end PC, and even controller inputs – is making the Quest even more accessible for fluid and flexible play.

Hand tracking should allow for more immersive play that responds to a range of hand gestures, though the feature may be limited to a certain number of compatible games.

We'll be reporting live from the OC6 conference in San Jose to bring you everything else being announced by the VR company.