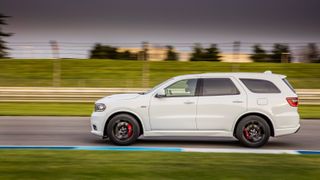 The information you have available to you as a driver can change how you drive. That’s was particularly true in a 2020 Dodge Durango SRT. In a recent drive, the ability to adjust the interface (known as Performance Pages) for more spirited driving helps you track things like braking distance and the current G-Force.

While the Performance Pages app that runs in the center console has been around a while, tweaking the gauges and timers you see is a hint of how future cars will work and what we’ll be able to do.

One thing that makes the gauges so useful is that it’s so easy to adjust which ones you see. In my test, I could press on any gauge and then select a different one. Here’s an example. I wasn’t aware of this, but it turns out in drag racing there are timers for the first 60 feet of a track, the first 330 feet, and the first 1,000 feet. I’ve never been to a drag racing track (they are not really around in my area) but I was surprised to discover that I can mimic this in the Durango SRT.

I pressed one of the default gauges (the one for the basic 0-60 test) and then found the timer for the 330ft test. You can then select whether you want this timer to show the latest or best time. I decided to try out the speed test on a closed road near my house, and it’s a fun way to see how quickly this SRT can pounce off the starting block. I adjusted other gauges as well, swapping out a few so that I could track the G-Force rating and add a 0-100 timer.

The Durango has a 475-horsepower engine with 470lb-ft of torque, so as you can imagine, it is pretty fun to test all of these gauges. I’ve never done any speed or G-force testing in a full-sized SUV before with this level of detail.

It made me drive a bit differently. I paid attention more to braking distance, and I learned how to use the launch control (which revs the engine and holds the brake for you). It was cool to see how much you can adjust the screen to match what you want to do.

The future is adjustable

Of course, the implication here is that we’ll be able to adjust the interface of cars in countless ways in the future. In fact, with more screens and more settings to adjust, cars will become more like the settings available on a smartphone. We’ll be able to move parts of the interface around as easily as we slide a sticky notes app around on our desktop computers.

And, we’ll drive differently. The best part of a customizable interface is that we can tune the car to our own needs and preferences. Here’s a couple of examples of that.

Parents might decide to tweak the displays so they really help a teen driver to focus. We can turn off all entertainment and media, enable safety cameras and pedestrian detection, and turn off everything else.

Those who aren't parents might want to make media more of a focus and disable some of the other features. Or maybe you're a driver who likes to adjust the seat warmers and climate settings more than anything else.

That future scenario is coming soon, and it will also help when we can tweak settings for an autonomous car – perhaps deciding that we want the car to drive more economically, and then monitor all of the eco-driving modes more closely than anything else.