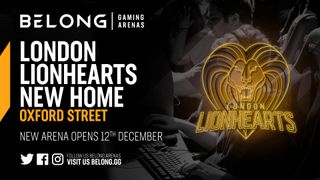 A big new gaming arena is set to open in London on Thursday, December 12, in House of Fraser on Oxford Street, as a joint venture between retailer Game and Belong, the latter of which already runs a large number of such arenas (20+) across the UK.

Specifically, the Belong Gaming Arena will be located at 318 Oxford Street on House of Fraser’s lower ground floor, and will boast the largest number of PCs and consoles set up permanently for competitive gaming ever seen in the UK.

The claim is that this is the UK’s largest gaming arena, and the total size of the 100-seater venue is 7,500 square feet. It will play host to various tournaments and competitions, and a good number of tournaments have already been organised for the first 10 days following the opening of the arena.

The London-based venue also sees a first for Belong, with the creation of a ‘pro room’ which is designed for professional (or indeed amateur) esports teams to practice in, plus there are also streaming stations, and a pair of gaming rooms which can be booked for parties or functions.

The new arena will serve as home to the London Lionhearts esports team which was previously based at Wardour Street.

Martyn Gibbs, chief executive of Game, commented: “This is a new look and feel for Game and our largest Belong arena to date. We are very much looking forward to creating some great tournaments and in-store offers throughout Christmas and 2020. Through listening and working with our gaming community, we believe we have created the best gaming venue possible and look forward to welcoming every gamer.”