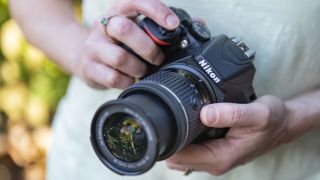 A new camera can be a sizable investment, but that doesn't mean there aren't some great options lower down the photographic food chain. Thanks to our knowledge of the best budget models, and some older models that are still fine performers, you can get a similar level of image quality to today's newest cameras for less. Here's our guide to the best cheap cameras you can buy today.

The best entry-level DSLR out there is great value

Nikon's D3400 was a hugely successful and popular DSLR, and it retained plenty of appeal once the D3500 was introduced, as it managed to offer much the same thing for less money. Now, the D3500 has dropped enough in price to make it the clear best buy. Key changes over the older D3400 include a newly developed APS-C sensor (though still with 24MP) and an even better battery life of 1,550 frames per charge, next to the D3400's very capable 1,200 shots per charge. You also get a better grip and a slightly redesigned body that's a bit lighter too. The D3400 is still around and remains an excellent first-time buy, but this newer model just has a slight edge.

A great all-round compact camera with a huge zoom range

Still one of our favorite compact cameras, the RX100 Mark IV manages to be technologically up to date without the lofty price of the (admittedly excellent) Mark V and VI models that came after it. In fact, it's this series has gone up to the seventh generation, giving credence to the popularity of this excellent line-up of compacts. And it's these successors that have seen the price of the Mark IV model drop significantly since launch. Now the RX 100 IV offers great bang for your buck, with 4K video on board and excellent image quality. Performance in both low light and in bright conditions is superb and, while the focal length is slightly limited, it's enough for most situations.

Not the cheapest EOS but excellent for the money

When the original EOS 200D / Rebel SL2 launched, it became an instant hit with anyone looking to enter the world of photography. Its easy-to-use menu system and on-screen user guide was a great help and the EOS 250D (confusingly also called the Rebel SL3 and EOS 200D Mark II) carries on that tradition. It offers beginners room to grow into more confident shooters. Canon's superb Dual Pixel CMOS AF system is available for smooth focusing during Live View, although 4K video is subject to limitations. Still, it's quite easy to find a dual lens kit for the EOS 250D for well under the $1,000 mark.

It’s a high-spec camera at a low-spec price

Don’t let the price fool you. The A6000 costs the same as other entry-level DSLR and mirrorless cameras, but it’s an advanced and powerful camera that has only dropped to this price through being on the market since 2014. So it may be old, but most of the specification still looks pretty fresh today. This includes a 24MP sensor, a fast hybrid 179-point autofocus system and continuous shooting at 11 frames per second (fps). Its age shows in other areas, though; it only shoots 1080p Full HD video and not 4K, and the screen isn’t touch sensitive. And while it’s cheap enough, the A6000’s high-end features make it a little advanced for beginners.

For adrenaline junkies who don't have the spare change to, well, spare for the full-featured GoPro Hero7 Black or the Hero8 Black, this is an excellent option. While you won't be shooting in 4K (it doesn't even have a 4K screen) and it lacks GoPro's Linear Mode, it offers the pretty much the same image quality as its more expensive counterparts. It's remarkably easy to use, with all the mounting accessories from action camera maker available at your disposal. It might also lack GoPro's signature image stabilization but it's still not too bad when mounted on a bike, for example. The body is waterproof down to 10m (33ft) without any housing, so you can recording your adventures – or misadventures as the case may be – pretty much anywhere.

An advanced compact for a cracking price

At launch, the Panasonic Lumix ZS200 / TZ200 / TZ220 (sorry, we just had to give you all the names) was one of the most expensive compact cameras, albeit one that was far more advanced than the competition at the time. However, the price had dropped, giving you the option to grab a full-featured compact camera the next time you want a pocketable traveling companion. The large 1-inch sensor delivers excellent image quality with lots of details, although do be wary of image smoothing in JPEGs when shooting at high ISO values. The camera does this to reduce noise, although you'll have more pleasing results when shooting in RAW. The 15x zoom range means you should be able to shoot anything from landscapes and architecture to tight portraits, making it a versatile option.

The perfect step-up from a smartphone

Fujifilm has made its reputation with its high-end X-mount mirrorless cameras, but it also makes a series of simpler X-A cameras for novices. While we've seen the recent launch of the X-A7, we're still fans of the X-A5 with its retro good looks and 15-45mm retracting kit lens. While there’s no viewfinder, the touch-screen display works very well and flips through 180 degrees for selfies. The image quality is terrific, even though its regular CMOS sensor rather than Fujifilm’s special X-Trans sensor, though the 4K video mode only works at 15fps, which is a let-down.

The D5600 is a step up from the D3000-series models, with a stronger set of specs to rival the likes of the Canon EOS Rebel T7i / EOS 800D. Key advantages over the D3500 (listed in position one here) include a larger LCD screen, which not only flips out and swivels all the way around to face the front, but also responds to touch, together with a more advanced autofocus system, Wi-Fi and a healthy range of additional control on the inside. Sure, you pay a little extra for the privilege, but if you need a little more growing space it makes sense to go for the D5600 so that it stays with you for years to come.

This handsome, rugged camera is a cracker for the money

The OM-D E-M10 Mark II is another example of a camera that's now been updated – in this case, by the excellent OM-D E-M10 Mark III – but that still makes a lot of sense for the budget-conscious user. Inside a sturdy body that's far more dashing than the average mirrorless camera lies an excellent electronic viewfinder, a highly effective image stabilisation system and burst shooting to a very respectable 8.5fps. True, it may not have the latest sensor, not 4K video recording, but neither is necessary if you're simply focused on taking great images.

The Lumix FZ1000's 16x optical zoom is less than that of typical bridge cameras, but that's due to its sizeable 1-inch sensor, which delivers a big boost in image quality. This isn't just any old lens, either, but rather a Leica optic with a large f/2.8 maximum aperture at the wide-angle end, which narrows to a still-respectable f/4 at full zoom. This helps you capture shots in low light without resorting to high ISO sensitivities, while the Hybrid 5-axis Optical Image Stabilisation minimises camera shake. 4K (Ultra HD, strictly) 3840 x 2160 video recording, advanced autofocusing, a superb 2,359,000-dot electronic viewfinder and raw shooting all help to make the FZ1000 one of our top picks.

Best budget cameras 2019 at a glance