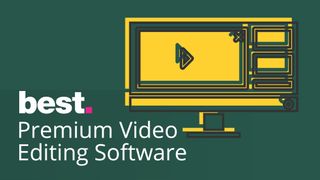 On the face of it, getting hold of the best video editing software is no easy task. There are loads of options out there, all boasting brilliant features and innovative add-ons. But the option that will suit a professional video editor won't necessarily be the best for the enthusiastic amateur.

That's where this TechRadar guide to choosing the best video editing software comes in. We've used all the best (and worst) editors around and distilled them down to an easy-to-digest list of our favorites.

The most impressive programs make your everyday tasks like cutting, trimming, combining and applying filters to clips as simple as possible. Buying an inferior option will lead only to frustration and a less polished finished product. The tools we've picked out for you in this guide are the very best in their class.

If you're on a particularly tight budget, or only need a basic tool for a spot of quick trimming and cropping, take a look at our guide to the best free video editors too.

Dedicate the time to mastering Premiere Pro and reap the rewards

Adobe Premiere Pro is an industry-standard video editor and getting the most from it will require an investment of time as well as cash, but if you’re serious about video then it’s well worth the effort.

There's a vast assortment of stackable audio and video filters, support for 360-degree and VR video, native support for a huge number of raw file formats, and the ability to work collaboratively with others. You can even start editing your videos before they've finished importing.

This kind of power doesn't come cheap and the monthly or annual subscription fee adds up, but the lack of a large initial outlay makes Premiere Pro surprisingly accessible. It's worth downloading a trial of the other video editors here before making a decision, but Premiere Pro is extremely versatile and the cloud-based model means you won't have to pay for upgrades as they're released.

Adobe Premiere Pro | From $20.99 (£19.97) per month
Like all of Adobe's single app plans, Premier Pro costs around $20/£20 per month when you sign up for a year. That's excellent value for such an impressive piece of software.
View Deal

A premium editor for Mac owners, with a unique interface

This is a video editor aimed squarely at the professional end of the market, but Apple Final Cut Pro X is not needlessly complicated. Its interface is a little different to most, and is built around a 'trackless' timeline that encourages you to organize elements into specific 'roles', such as voiceover, music and titles.

If you're looking for a video editor to pair with your drone, Final Cut Pro is an excellent choice. It supports raw video from all the major makes and models, and is regularly updated with additional profiles. It also supports 360-degree video editing (fast becoming mandatory for premium video editing software) and HDR, with advanced color grading.

Rather than adopt a subscription model like Adobe, Apple has chosen to make Final Cut Pro available for a one-off flat fee. It's relatively expensive, but includes all major updates and will work out cheaper than Premiere Pro if you keep using it over a couple of years. If you own a Mac and are torn between Apple and Adobe, we recommend taking the free trials of both for a spin before making up your mind.

A video editor that puts premium tools within reach of newcomers

If Adobe Premiere Elements and Apple Final Cut Pro X are overkill for your video editing projects, take a look at CyberLink PowerDirector.

Although PowerDirector is a premium, feature-packed video editor, it's also very forgiving, and offers a gentle introduction to post production that won't faze complete beginners. The Magic Movie Wizard is the ultimate example, paring the task of combining and optimizing videos down to a few clicks. You'll achieve better results by spending a while in the timeline editor, but for anyone who just wants to quickly piece something together to publish on Facebook, it's ideal.

That's not to say that CyberLink PowerDirector is dumbed down, though; far from it. The software also offers a standard post production interface based around control panels and a timeline. It sometimes takes a little while to drill down to the finer controls, but every filter and option is extremely flexible once you start exploring. Perhaps most impressive of all, CyberLink PowerDirector makes video editing fun.

If you're interested in special effects, HitFilm is the editor for you

HitFilm Pro is a premium video editor that's a firm favourite with fanfilm makers - and with good reason. It's packed with tools for creating stunning special effects, but is accessible enough for home users.

One of HitFilm Pro's biggest selling points is the ability to tackle pretty much every aspect of video post-production within the editor. Animations, titles, audio editing and color grading are all accessible with a couple of clicks, but the interface is intuitively designed and never feels cluttered.

Unlike the other video editors in this roundup, HitFilm Pro supports importing and animating of custom 3D models, complete with simulated 3D cameras, custom shadows and dynamic lighting. There are also impressive particle effects, and superb chroma-keying to minimize annoying spill.

A friendly introduction to video editing for complete beginners

Of all the premium video editors in this roundup, Adobe Premiere Elements is the most beginner-oriented. It's designed to make video editing as easy as possible, and even its Expert interface is extremely straightforward.

Unlike Adobe's premium software (like Premiere Pro), Premiere Elements is only available as a one-off purchase, so you aren't committed to paying a monthly fee to keep using it. It's also one of the most affordable video editors around, which is impressive for a huge name like Adobe.

Some video editors assume a certain degree of familiarity before you begin, but Premiere Elements is ideal even for total beginners. Its interface features large buttons, clearly labelled. There are also some excellent tutorials included to help bridge the gap between creating a video using wizards and using the more traditional multi-track timeline.