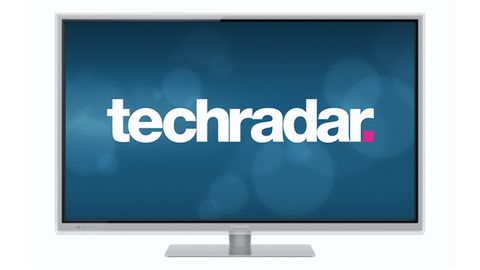 Gloss black is dead - it's official - but only for the well heeled. For so long the dominant colour scheme for flatscreen TVs, the 3D-ready, Edge LED-backlit Panasonic TX-L42ET50B - the first of many Panasonic TVs for 2012 - bears all the hallmarks of a high-end attempt.

And that, ladies and gentlemen, means a super-thin Crystal Frame metallic bezel.

Well, kind of. The super-slim design (the Panasonic TX-L42ET50B is a mere 36mm in depth) features a visible metallic-looking bezel that's a tiny 11mm wide, but it's part of an optical illusion.

Around the edge of the panel is a 10mm transparent plastic rim that ripples into two steps, the foremost layer housing that metallic bezel. Inside that is an 11mm seam of black around the actual panel, which ought to help push the perception of contrast on this Edge LED-backlit panel.

It might rely largely on trickery, but overall it's a pleasant, understated look that's a mite fresher than the plain gloss black that other brands try to dress up as new and exciting (stand up Sony and its dull-as 'monolithic' design).

The latter may sound startling to those brought up to believe that 100Hz was advanced tech, but it's actually not as impressive as it sounds, instead being a 200Hz mode with backlight scanning and blinking. In short, it's maths, not reality.

More notable is the Panasonic TX-L42ET50B's use of active shutter 3D technology.

But the cheaper, more easy-going (glasses-wise) passive 3D workaround had been expected to dominate on smaller TVs in 2012.

That the company that invented active shutter 3D should stick with it despite the commercial success of passive 3D televisions is a telling move.

Viera Connect adds Netflix for 2012, as well as a shopping platform, although interactivity doesn't stretch to the touchpad remote control employed on some of Panasonic's high-end 3D Blu-ray players, such as the Panasonic DMP-BDT320.

There are many other 3D-ready LED-backlit Smart Vieras.

For those after a slight price drop and more interested in 3D convenience than ultimate detail, Panasonic has made the rather unexpected move of poaching some of LG's FPR panels to power its ET5B lineup.

Where once Panasonic TVs were simply called Viera, now they are Smart Viera.

A Freeview HD tuner isn't strictly part of that arsenal, but it's good to see on the Panasonic TX-L42ET50B, although there is a big disappointment to counter that; there are no 3D glasses included in the box, which makes 3D viewing an unlikely luxury.

For testing purposes we were supplied with a pair of the super-lightweight (at just 27g) TY-ER3D4ME Bluetooth active shutter 3D glasses.

We've discussed the merits of active shutter vs passive 3D before, but the former's use here underlines which technology Panasonic prefers (then again, it did invent active shutter, so does have a vested interest in its promotion).

Arguably much higher up in our wish lists for all TVs is their smart dimension, and here we get Viera Connect, an interface that's virtually identical to last year's incarnation. Netflix is the new kid on the block - as it is everywhere, it seems - and it joins Acetrax for video streaming, although BBC iPlayer and YouTube are still the heavyweights.

We used the latter to play an entire show of Morrissey performing with Jools Holland from a few years ago - surely the zenith of the smart TV revolution.

It gets a lot smarter than that, with a downloadable web browser and the chance to sign up, give your credit card details and start downloading games, such as Asphalt 5 and Uno.

Networking is now a permanent feature of TVs, and the Panasonic TX-L42ET50B doesn't disappoint. It uses the occasionally flaky DLNA system, although a connected HDD containing recorded TV content can be accessed by other DLNA-equipped devices, too.

Ins and outs on the Panasonic TX-L42ET50B are many, although their positioning is an acquired taste. All four of the HDMI inputs - one of which is Audio Return Channel (ARC)-compatible for routing audio to an AV receiver and cutting out an optical cable - are ensconced in a side panel, which is firmly recessed from the side.

However, if all of those HDMIs are occupied by high-quality, not-very-bendy (that's a technical term) cables, some could protrude from the sides.

Also up here are two USB slots, which again isn't very practical, since one of them can be used to hook up an HDD for making recordings from the Freeview HD tuner.

There's an SD card slot up here, too, for playing digital photos and music, and a Common Interface slot for adding to the Freeview channel roster.

A further connections module on the undercarriage of the Panasonic TX-L42ET50B comprises wired LAN (although there's a Wi-Fi module built-in, thankfully), a VGA port for attaching a PC, RF input and a digital optical audio output.

There are also two small concessions to slimness; ports for slimmed-down adaptors for both Scart and component video. The latter is for 'legacy' kit, since component video is no longer used on DVD and Blu-ray players. Also note that the Panasonic TX-L42ET50B lacks a composite video input.