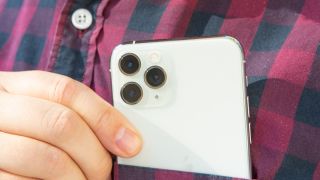 In an Apple earnings call, Tim Cook described year-over-year sales growth, especially for the iPhone 11. But when asked if an iPhone 5G was in the works, the company’s chief executive does what he does best: downplayed without denial.

It’s apparently not time for Apple to hype us on a 5G iPhone, but that doesn’t mean we won’t see one come out later this year in at least one model of the iPhone 12. Why? Mainly because the iPhone brand is doing just fine, thank you, and the company conceivably doesn’t need to prime consumers on the idea of yet another premium iPhone.

It's a much better idea to de-emphasize the importance and immediate potential of 5G...right up until the point that a 5G iPhone launches. Then it's going to be the next big thing and likely all Apple can talk about.

Of course, Cook has another reason to downplay the idea: 5G networks are sparse, rough, and expensive to enjoy.

“With respect to 5G, I think we’re in the early innings of its deployment on its global basis,” Cook said during the earnings call when asked about a potential iPhone 5G.

He’s not wrong. Only a handful of phones in the world can connect to these networks, which run on different frequencies and tech setups. Carriers are picking from meager selection, and customers don’t have a lot of competition or choice, especially if they’re outside coverage areas - which, currently, is reserved for only the biggest cities.

It’s hard not to see his further comments to a reiterated question on 5G as downplaying the lack of cohesion among 5G’s global rollout, as tech journalist Rene Ritchie paraphrased:

Cook: Want to stay away from commenting on future products.When thinking of 5G, look around the world at different deployment schedules. They look a lot different than here.Won’t comment on price of unannounced products.(Nice try though!)January 28, 2020

In other words, Cook could be buying time until the networks mature - which they’re doing at a far more rapid rate than 4G had - and people start really buying into their potential. By June, which is typically when Apple holds its WWDC event where it teases products coming later in the year, Cook could sing a far more triumphant tune.

The alternative: no iPhone 5G in 2020 gives too much ground

While Apple could absolutely demur for another year on 5G and wait until 2021, when the networks will surely be far more mature, that’s not just far off - it will be a market with far more 5G phones.

More importantly, Apple would be allowing its rivals - Samsung, Google, and other Android flagship phonemakers - to take territory in the top tier of devices, which has been where the iPhone has kept relevance.

Worse, Apple would likely lose ground in China, a burgeoning growth market for iPhones, which saw record sales of the iPhone 11 in the last quarter, as Cook pointed out in the earnings call. Chinese companies are gearing up to release more affordable 5G phones; it’s entirely possible an iPhone 5G released in 2021 wouldn’t catch up in the region.

Other markets where iPhones have a stronger presence could weather the storm, but there’s reason for Apple to get one out this year: 5G phones have raised the price ceiling for handsets. Given the wide profit margins Apple enjoys on its high-tier flagships, this would conceivably tempt the company into getting a 5G model out this year.

It’s obviously possible that Cook’s hesitance ends up accurately reflecting Apple’s attitude toward 5G for the rest of the year. The iPhone brand is strong enough. The company could wait even longer to put out a 5G phone on networks worthy of an Apple-crafted handset. But would they leave more money on the table when the 5G-enabled Samsung Galaxy S20 is likely to launch on February 11?