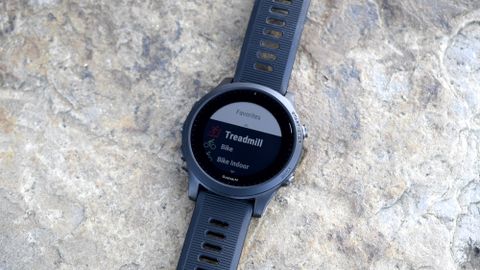 So here’s the bit that really matters: the sports and fitness tracking. The Garmin Forerunner 945 supports more than 30 different activities, with everything from golf to rowing accounted for.

If your sport isn’t on the list, you probably shouldn’t be doing it. We kid, of course – if it’s not there, simply add it manually as a new activity. And once you’re done working out, any completed activity will be synced to the Garmin Connect app where you’ll be able to peruse it almost instantly.

There’s a lot of data here. One of the most helpful features is Training Load, which measures your training over the last seven days and will tell you if you’re in the correct range to improve fitness – or if you need to take it up a notch.

Similarly, the Training Status and Training Effect features will tell you how productive your workouts are, the effect they’re having.

Performance Condition, meanwhile, works during an activity and takes your VO2 max score as its baseline and tells you how your current workout compares. While out running the other day, the 945 alerted us that we were performing at a -3, which was a little discouraging, especially as we’d only made it 1km into our route at the time.

Garmin has also brought over the Body Battery feature from the Marq, which tells you the optimal time of day to work out.

One of our favorite features on the Garmin Forerunner 945 is its map routing. The watch comes with full-color maps, as well as the ability to seek and set running routes within your vicinity. You can set how far you want to go, and the map will provide some suggested routes. Handy.

What’s great about the Forerunner 945 is all the sensors you can pair to it. That includes heart rate chest straps, as well as power meters for cycling.

For runners especially, the Garmin Forerunner 945 goes above and beyond. In fact, we’re willing to wager that most of the features are ones you’ll never even find, let alone want. But they’re there, and that’s what makes the 945 one of, if not the, most comprehensive running watch on the market.

There’s an incredible amount of customization on the 945, including the ability to build interval sessions around time or distance.

Some of this can be done on the watch itself (we were able to build a full interval workout this way), but you can also design workouts on the Garmin Connect app or web browser and send them over to your watch.

The live readouts provide a rich amount of detail too, including pace, lap detail and heart rate – although you’ll need to scroll through some of these screens using the buttons.

But let’s answer the big question: is it accurate? The Forerunner 945 tracks many things, but we can say that two of the biggest metrics – GPS and heart rate – are tracked with high precision.

If you’re hiking, the Pulse Ox sensor can tell you how you’re acclimating to higher altitudes, but otherwise you can ignore it. For the less vertically inclined, there are good improvements in the heart rate sensor here that make the optical tracking more accurate.

We’ve taken the Garmin Forerunner 945 on a few runs now, testing it against the Polar H10 chest strap, and the results have been incredibly close.

On a steady run, shown above, the watch had no problem keeping up with the EKG chest strap. But we also tried it for some more intense interval bursts (usually where wrist-based heart rate monitors come unstuck) and it mirrored the peaks and dips of the Polar monitor with impressive accuracy.

One thing we will say: we’ve caught the live readout lagging behind on several occasions, which can be a problem for heart rate zone training. While our experience has been generally very good, these watches still aren’t quite up to the gold standard of an EKG chest strap.

The good news is that you can pair one directly to the watch, and if HR training is of utmost importance to you, we’d recommend doing so.

GPS tracking on the Forerunner 945 is outstanding, but considering this is Garmin’s wheelhouse, it’s less surprising.

The map below shows a run on the 945 where we used MapMyRun for control, and the results showed only a 0.03-mile difference. Even then, the plotted map on MapMyRun measured a couple of corners too widely, so the real margin is even smaller.

And for what it’s worth, the watch performed much better than our phone which, using the Polar app, took some suspect shortcuts while tracking us. So yeah, it’s good, although it’s worth pointing out that our tracked exercises were more or less on level ground. We can’t say how good the GPS would be for climbing.

We didn’t manage to try out every exercise on the Garmin Forerunner 945, but we did get it in the pool for a couple of swims.

Now, this isn’t primarily a swimming watch – Garmin has a specific range for that purpose – but Garmin does talk it up as a feature.

We wouldn’t recommend buying the 945 for this purpose, however. While it’s not terrible, it added an additional three lengths to a 600-yard swim workout – an additional 75 yards – which might not seem a lot but is a big margin of difference for any serious swimmer in training.

Weirdly and annoyingly, the watch was in perfect sync for about 400 yards before it started over-calculating.

We suspect the 945 would fare a little better in open water (which, to be fair, is more appropriate for triathletes), where it can track using GPS, but we haven’t been able to test that thesis.

On the one hand, this is primarily a runner’s watch. On the other, it’s a $600/£520/AU$949 watch that offers swim tracking as one of its main workouts, so it feels fair to critique this aspect. You do get a SWOLF score in the app (a measurement of strokes per length and the time for each length), but not heart rate.

We actually put it up against Polar’s swim-dedicated OH1 tracker in the hope of being able to compare, but the Forerunner didn’t even make an attempt – and we understand why. It’s difficult to get a good optical reading underwater, and while some sports watches (like the Apple Watch) do try anyway, we’ve never found them to be reliable.

Garmin’s sports watches are slowly acting more like smartwatches, but they’re still lacking. You get smart notifications on the Forerunner 945, but sadly it’s a case of having notifications from all apps or no apps.

For music, you can either upload your own music files (which is a slow, slow process), or make use of a supported third-party service. If you have a Spotify or Deezer subscription, you’ll be able to get the app and download offline playlists to the watch, allowing you to workout with no phone. You can pair Bluetooth headphones straight to the watch.

Speaking of which, Garmin Pay means you can leave your wallet behind too. Once you’ve linked a card using the Garmin mobile app, you can pay by simply tapping your wrist on a wireless terminal.

And of course, with the 945 you have access to the entire Garmin Connect IQ store, where you can browse custom clock faces, widgets and apps.