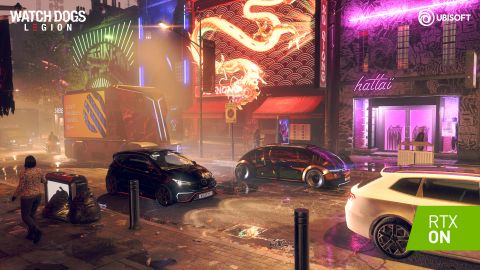 Whether we're causing mayhem in the open world, or confronting our guilt over running over a random civilian, Watch Dogs: Legion takes the open-world franchise to another level, and we can't wait to see the full game.

WHAT IS A HANDS ON REVIEW?

"Hands on reviews" are a journalist's first impressions of a game based on spending some time with it ahead of our full review. In this case, we played 20 minutes of open world gameplay at Gamescom 2019. The important thing is we have been able to play with it ourselves and can give you some sense of what it's like to enjoy, even if it's only an embryonic view. For more information, see TechRadar's Reviews Guarantee.

Watch Dogs has had kind of a rough time over the years. The first game was a bit of a disappointment, and the second didn't sell very well, no matter how much we loved it. However, with Watch Dogs: Legion, Ubisoft seems to be learning from some past lessons, along with some interesting new mechanics that should see this game stand out in a crowded marketplace.

In Watch Dogs: Legion, you'll be able to recruit your own personal army of hackers by profiling potential members and helping them with their problems. It sounds a little creepy in theory, but in practice its an engaging mechanic. We were able to go hands-on with Watch Dogs: Legion at Gamescom 2019, and while our play time was limited to about 20 minutes, we did get a pretty good feel for the open world tittle.

Hacking in the free world

Right off of the bat, if you're at all familiar with how Watch Dogs 2 played, you should be able to pick this game up and hit the ground running. It controls pretty much exactly the same way, but the UI is a lot more attractive this time around.

Then, we went to hack a civilian, and saw two options up at the top of the little window that popped up: hold RB to 'track', or tap it to 'save'. We did the former, and a new objective popped up both in the journal and mini-map. Someone was blackmailing this person, and it was up to us to clear their name.

Then, of course, we hijacked a car and drove recklessly to the objective marker, as you do, but something has changed. As we were getting out of the car, we hit a pedestrian and noticed that they were flagged as 'injured' on the hacker-screen-thing. The Ubisoft rep told us that if we injure or, heavens forbid, kill a civilian, their family and friends will be harder to recruit into DedSec. This might actually prevent people from driving around like maniacs – we were certainly much more careful moving forward.

By the time we got to the objective marker, we were starting to run out of time, so we rushed a bit. We ran into an enemy stronghold and died pretty much instantly. And, that's even with a character that had a cloaking ability that was definitely ignored.

Luckily, because this game is ostensibly based around having a ton of swappable player characters, we were able to jump back into the action immediately, trying to ignore the fact that the character we were previously controlling is gone forever. Luckily, with this new character's more powerful weapons and combat abilities, we were able to actually finish the mission this time – though with no semblance of stealth.

We probably wouldn't have had to rush to finish the objective in this demo if we didn't keep stopping to look at the beautiful reflections. Not only has Ubisoft managed to craft an incredibly life-like version of London, but with the ray-traced reflections, those infamous rain puddles were constantly drawing our attention.

If you're lucky enough to be rocking an Nvidia Turing graphics card in your system, you might want to give this game a try, just to see how reflections are done right. Every window you walk past, every puddle, even especially shiny cars – you'll see realistic reflections. We are a bit obsessive over these ray tracing features, but, trust us: you're going to want to turn this effect on – assuming you have the hardware to power them.

Watch Dogs: Legion, at least based on our first impressions, promises to build on everything that made the previous entries in the franchise as good as they were. You've got hacking, a beautiful open world and addictive gameplay. Add on top of that the new recruiting mechanics and special abilities, and this makes for a much more dynamic gameplay experience than ever before.

We can't wait to get our hands on the full game on March 6, 2020 on PS4, Xbox One and PC – just keep in mind you'll have to go with the latter to see the gorgeous RTX reflections.