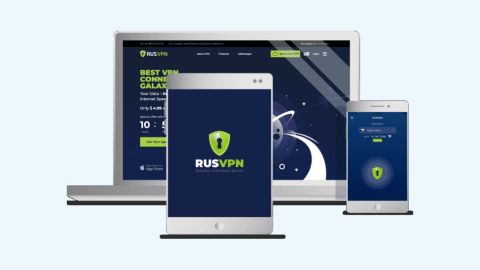 RusVPN delivers the goods in some areas, but a pile of bugs and privacy problems make it impossible to recommend at the moment.

RusVPN ('Reliable. Unlimited. Secure') is a small but interesting VPN provider who scores highly in some areas, but falls behind in a few others.

The network is relatively small at just 29 countries, for instance, and many of those have just one server.

There's much better news on the app front, with custom software for Windows, Mac, Android and iOS, Chrome and Firefox browser extensions, direct support for Linux and routers, and OpenVPN compatibility to cover you everywhere else.

Other areas of the website aren't as impressive, with some odd phrases, presumably poorly translated from the original. "There is a possibility of manual editing of ligaments" - well, okay.

Prices are fair, and range from $9.99 billed monthly to $4.99 over a year. That's good value for an annual plan, although if you're willing to subscribe for two or more years, you can pay under $3 with companies including NordVPN and CyberGhost.

Payments are accepted via card, PayPal, QIWI, WebMoney and others. There's no trial and although in theory you're protected by a 30-day money-back guarantee, the small print reveals this is almost useless, as you won't qualify if you've transferred more than a tiny 500MB of data.

RusVPN has surprisingly little to say about its logging policy. There's no real information on the front page of the site, and although there's a specific No Logs page, that only contains a single sentence on the topic: 'We do not keep any logs of VPN usage.'

'We run a non-permanent connection log to solve technical problems including random name generation and internal IP address assignment (private IP address) which are reliably removed every few hours. We strictly and purposefully do not write down any information to mitigate our legal liability. We do not monitor the activity of your browser and do not record any records. It is simply impossible with our internal interface. All data about the use of the service is anonymous and is not tied to your real, public IP address.'

While this seems to contain some good news (any logs are regularly detailed, actions can't be tied to your real address), it's lacking in technical detail with some odd elements ('we don't write anything down'?), and doesn't leave us feeling we completely understand how RusVPN really works. That might be another translation issue, but whatever the cause, we're like more clarity in RusVPN's descriptions.

Setting up a RusVPN account was easy, and after we'd handed over our email address and cash, the website redirected us to a web console. We grabbed a copy of the Windows client, but there were also download links for Mac, Linux, Android, iOS and the Chrome and Firefox extensions.

The Windows client interface has a simple interface, and works much the same as other VPN apps. Your current location and IP address are clearly displayed, alternative locations are available on a list and you can connect with a click.

The server list doesn't include a Favorites system, forcing you to scroll to find a location. It does include server load stats, but these appeared to show an issue with the UK, where the figures ranged from 69% to 112% (yes, 112%.) As most servers displayed 0% load, most of the time, and were hardly ever higher than 25%, the UK figures (assuming they're correct) seem to indicate a real capacity problem.

Client settings cover the basics only: switching protocol (OpenVPN UDP/ TCP, L2TP, PPTP), launching the client with Windows, and enabling or disabling a kill switch. That's not bad as a minimal set of options, but RusVPN spoils the effect a little with some confusing captions.

Enable the kill switch, for example, and we would expect the client to block your internet access if the VPN connection drops. But the client says it means the 'application will automatically disconnect, when VPN is unavailable.' We can just about make sense of this - perhaps it means the client will completely disconnect you from the internet, not just disconnect itself - but like the no-logging policy, it's just not very clear.

The client had some major practical problems, too. These started with lengthy connection times which could be more than a minute (most clients take between 5 and 10 seconds.)

Digging deeper, we found the client was using the PPTP protocol, which even its Settings page was the 'least secure method' and should only be used in specific cases.

By default, the client chooses its protocol automatically, so we changed this to OpenVPN UDP, and tried again. We couldn’t connect, though, and it was the same story with OpenVPN TCP and L2TP. PPTP was the only option that worked.

This seemed a likely explanation for the long connection times: the client was trying three other protocols first, timing out on all the others, and giving us PPTP as a last resort.

That's not the end of the story. We checked the PPTP settings, and found even these weren't as secure as they should be, with encryption set as 'Optional' -- the client should connect even if there's no encryption. That doesn't mean it'll ever happen (it depends on the server) but it's still a concern.

We tried connecting to the London server via OpenVPN GUI, another VPN client. That got us in, good news as it suggests there's no major server issue. But the OpenVPN log warned us that 'no server certificate verification method has been enabled' for the connection, an important issue with RusVPN's configuration file which could leave us vulnerable to man in the middle attacks.

Moving away from our protocol problems, we ran a final quick test on the client's kill switch, and discovered two further issues.

The first is that, if the connection drops, there's a period of perhaps a few seconds before the kill switch kicks in. The likely privacy impact is small, but there's still a chance that your real IP will leak to the outside world.

This isn't a big deal in itself. In fact, it may never happen to the vast majority of users. But it's another example of how the client isn't working as it should, and it leaves us wondering what other problems RusVPN might have missed.

RusVPN's claims to unblock just about every major web platform, and that generally makes us suspicious. The best VPNs are usually more cautious, as they know it's very difficult to guarantee that kind of success over the long term.

But then we tried the service with a few sites, and it worked perfectly. US YouTube? Simple. BBC iPlayer? Streamed immediately. US Netflix? We got in with every server we tried.

Our speeds tests began relatively poorly, with UK connections struggling to 25-30Mbps (most VPNs manage at least twice that.)

Near European countries delivered much better results, with for example Germany averaging 50Mbps. That's much closer to the performance we would expect from other VPNs, and perhaps suggests that the client's server load figures (very high for the UK, very low everywhere else) are correct.

Our other test locations generally matched the decent European results rather than more sluggish UK, with one or two exceptions. Singapore couldn't manage 1Mbps, for instance, but the US reached a capable 30-50Mbps, which Australia averaged 25Mbps.

There wasn't such good news with our final privacy tests, unfortunately. RusVPN allocated IP addresses from the countries it supports, but IPLeak and DNS Leak Test both showed DNS leaks when connecting via PPTP.

RusVPN has many of the ingredients of a good VPN - loads of apps, easy to use, excellent website unblocking, fair price - but a host of privacy issues and problems make it difficult to trust, at least right now. Check back in a year or two, when hopefully they'll be fixed.