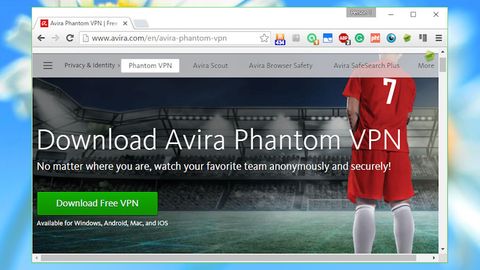 Avira's VPN offering is easy-to-use and a solid performer, albeit a little overpriced for what you get.

Every internet security company offers some form of privacy protection – ad-blocking, anti-tracker, secure browsing – but Avira takes this to the next level with its own VPN product.

Avira Phantom VPN is aimed very much at the home user. The website ignores just about every technical detail, not even mentioning the protocols it supports, and instead focuses on the core benefits of a VPN: anonymity, encryption and accessing geoblocked content. But dig into the small print, and a reasonable feature list begins to appear.

The network has 36 locations, for instance. Okay, 12 of them are in North America and most of the rest are in Europe, but you still get servers in Australia, Brazil, Hong Kong, Japan, Mexico and Singapore.

There are native apps for Windows, Mac, iOS and Android, as well as Chrome extension. That's not bad, although there's no direct support for setting up routers, smart TVs, games consoles or anything else that might require custom OpenVPN configurations.

Avira Phantom VPN makes its connections using the industry-standard OpenVPN and AES-256 encryption. That's good, too, but there's another 'but': you can't tweak OpenVPN in any way (switch between UDP and TCP connections, for instance), and you can't switch to another protocol, which can sometimes be useful if you can't get connected.

Avira doesn't mention P2P support at all on the website, as far as we could see. A quick check shows torrenting seems to be available on all servers, although as the company seems so unenthusiastic about it, Phantom VPN wouldn't be our preferred torrent choice.

The service does have one unusual plus, with no 'buts' at all: you can connect to it with as many devices as you like. That's a notable improvement on other VPNs, which typically restrict you to 5 devices or even less (ExpressVPN only allows 3), although how many people really need to connect with more than 5 devices simultaneously is open to question.

Whatever you think of Phantom VPN's features, there's a definite benefit in its free account. This has by default a crippling 500MB/month data cap (plus you get five additional free minutes after hitting the limit, before disconnection), but it doesn't require registration or an email address: just download, install and connect. Register with your email address and you'll get 1GB. You still won't be able to stream anything much, but for occasional low-bandwidth use, perhaps while travelling, it might be enough.

Upgrading to a paid account gets you unlimited data, DNS leak protection, a kill switch to reduce the chance of a data leak if the VPN connection drops, and technical support to keep everything running smoothly.

An unusual mobile-only plan covers as many iOS and Android as you need for only $5.19 (£3.99) a month, again billed monthly.

Avira Phantom VPN gets off to a good start in privacy terms with its no-registration-required free account. The 500MB a month data allowance almost certainly won't be enough, but the ability to pay for an annual plan via Bitcoin can also help to preserve your anonymity.

The service does a decent job of protecting your traffic with its protocol choices (OpenVPN and L2TP/ IPSec), although your inability to change or tweak these in any way (choose new ports, for instance) might be an issue for experts.

Avira's free plan doesn't give you a kill switch, which means there's a small chance your identity might be given away if the VPN connection drops. That's not a problem if you upgrade, though, and the free and paid editions both give you capable DNS leak protection. We checked the desktop and mobile clients with IPLeak, DNSLeakTest and DoILeak, and found no privacy leaks of any kind.

A support document gives some details on Avira's logging policy, explaining that the service doesn't track "your real IP address, the virtual locations (IP addresses) you use while surfing, the websites you visit [and] any information that can link you to an action, such as downloading a file."

The document admits to logging the amount of data that you consume, whether you're a free or paid user, and (optionally) diagnostic data such as details on app errors. But none of that constitutes any significant privacy risk, and many commercial VPNs record similar details, and often even more.

Installing Avira Phantom VPN on a PC is easy, although it does have the same issue as all other Avira software: you also get the standard Avira launcher, whether you want it or not.

(There's nothing wrong with the launcher - it's a simple way to view and manage all your Avira products from one place - but if you're only using Phantom VPN, it's just not necessary.)

The launcher can be safely ignored, though, and otherwise the client looks and feels much as you would expect. Launch it from a system tray icon, and click a button to connect to the nearest VPN server, or choose your preferred option from a list. Easy.

The location picker is relatively basic, with no ability to view servers within a country, and no Favorites system. Location ping times help choose the best server for you, though, and switching servers is also very simple. There's no need to close the current connection before you can start another, just choose a new location and Avira automatically reconnects for you.

A minimal Settings dialog enables launching the client when Windows starts, enabling a kill switch to block internet traffic if the VPN drops (bizarrely, this is turned off by default), and a limited ability to automatically protect connections to wireless networks. These features are all worth having, but experts might miss the lack of low-level options and tweaks they'll often get elsewhere.

Avira Phantom VPN's Android app has one welcome advantage over its Windows cousin: a 7-day free trial, a more realistic way to properly test the service than the desktop's limited data allowance.

Otherwise, though, the mobile apps work much the same, though with a few less features (no ping times on the location list, no kill switch), although you can still have the app automatically protect connections on insecure wireless hotspots.

The Android app also seemed to misbehave on our test system by occasionally refusing to disconnect, no matter how often we hit the Turn VPN Off button. We don't see others complaining about the same issue, so perhaps it was a temporary problem, or something relating to our test system. That's still not good news, though - we've tested multiple VPNs on the same system, and this was the first time we've ever had an issue.

Connecting to Avira Phantom VPN locations sometimes took longer than expected, even with nearby servers - anything up to 15 seconds. There were no timeouts or connection errors, though - we always got connected, eventually.

Download speeds from our nearest UK server were surprisingly low, averaging 27Mbps on a 75Mbps line.

Near European countries were much faster, with the Netherlands giving us 60-65Mbps, and even Poland delivered better results with an average of 31Mbps.

US speeds ranged from a capable 54-58Mbps for New York and Newark, to a still-acceptable 30-35Mbps from Los Angeles.

Even the longer distance connections performed better than we expected, with Brazil averaging 32Mbps and Australia giving us 35-40Mbps.

Avira doesn't make any specific claims about Phantom VPN's ability to access geoblocked content, so we tried logging into a few restricted websites to see what would happen.

BBC iPlayer is making increasing efforts to prevent VPN access, and it successfully locked us out. We could visit the site while connected to Avira's UK location, but when we tried to stream content, were told "This content is not available in your location."

YouTube seems to make only the most basic of IP address checks on visitors, and Phantom VPN's US servers bypassed this without difficulty, allowing us to freely view US-only content.

Netflix is one of the most well-protected websites, and Phantom VPN wasn't able to give us access. Whatever server we tried, we saw nothing more than the usual stern 'you seem to be using an unblocker or proxy' error message. This can change week to week, though, as a VPN changes IPs and Netflix moves to block them, so it's always worth checking yourself for the latest status.

Visit Avira's support site and you might hope for a stack of helpful tutorials on installing, using and troubleshooting the service. What you actually get is a search engine which by default returns matching threads from the user forum. There's some useful information to be found there, but it doesn't begin to match the professional content from a provider such as ExpressVPN.

There are knowledgebase articles, but they're often just as basic. For example, the FAQ on what to do if you get a 'cannot connect to server' error is to try another server, or reinstall the app. Gee, thanks.

Free users get no further help, but if you've paid for Phantom VPN Pro then you can get support via phone or email. We would prefer live chat for its speed and the ability to keep a history of what you've discussed, but phone support could be a big help for novice users, and overall, it's a definite plus for the service.

Avira Phantom VPN's lack of features and device support will be a big issue for experts, but if you only need the VPN basics, or can live within the limits of the free plan then it might be worth a look.