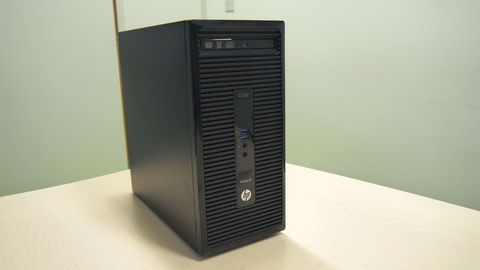 At just under £200 the HP ProDesk G2 is a more than decent purchase for individuals or small businesses looking for a desktop PC. At half that price, it's a rather incredible bargain…

Desktop computers remain pretty much the norm in the business sector, where a permanent PC is often preferred to a laptop for practical and financial reasons. Sure, laptops can be seen as being more versatile but they're also more expensive, have fewer expansion capabilities and are usually more difficult to repair. The market is currently dominated by HP and Lenovo, with ultra-small form factors (the Intel NUC and the Compute Stick being two of the more well-known ones) becoming more popular.

HP's ProDesk range is part of the company's ambitious plan to reinvent itself meaningfully. The firm did well with the HP 260 G1, a great-looking, keenly priced device that impressed us when we reviewed it earlier this month.

We're looking at another model from that family today: the ProDesk 405 G2, a micro-tower computer that costs £199.98 at Ebuyer, which provided us with the review sample, but can be had for just £99.98 once you trade in a computer that comes with Windows XP (you can find out more about the trade-in terms and conditions on HP's website).

Both Nigel O'Hara and Laptopsdirect sell it for cheaper. The promotion ends on July 31, 2015, but it's likely that it will be prolonged seeing as Windows 10 has just been launched. Note that you can trade in up to 50 computers.

The ProDesk 405 G2 reminds us of the Lenovo ThinkCentre E50, its main competitor in this price range. Like the latter, it's a bog-standard base unit with one 5.25-inch accessible bay that contains an optical drive. We like the shingled-slate design of the front, and this is a smart distinctive touch.

Other than the HP logo, there are two USB 2.0 and two USB 3.0 ports in the front plus two audio ports. At the back are two extra USB 2.0 ports, four legacy ports (including VGA, PS2 and Serial), four audio ports, a DisplayPort and an Ethernet connection.

Opening the case couldn't be easier – it's simply a matter of undoing one screw by hand. The tool-less chassis is great for whoever wants to peep inside the computer, but more of a worry for the system administrator who might be concerned about insider threats or missing components.

At 16.5 x 33.9 x 35.5cm and measuring well under 6kg, this desktop PC can be easily moved around and is a good compromise for anyone looking for a relatively small, portable device that can still be updated.

Inside the base unit is an MSI MS-7938 motherboard with an AMD A8-6510 APU at its heart. That processor is usually found in laptops and should perform on par with Intel's Core i3 or Pentium CPUs (Haswell and prior architectures). It has four cores clocked at 2.4GHz, 2MB cache and an integrated Radeon HD8400 GPU. The latter is powerful enough to drive two displays, and for the occasional spot of light gaming.

The fact that it dissipates only 15W explains why the heat sink fan covering it is so small compared to what we're accustomed to seeing on other models.

There's also a 4GB DDR3 SDRAM memory module in one memory bank, enabling the user to upgrade to 8GB if needed. The rest of the specification list includes a 500GB HDD (a 7200RPM model, a rarity at this price and a welcome improvement on the 5400RPM drives usually found in entry-level PCs), DTS Sound+ audio management technology, HD audio with Realtek ALC221, GbE connectivity and a DVD writer along with a 180W PSU. The low PSU wattage means you won't be able to add a powerful graphics card to this machine should you want to.

A standard keyboard and mouse complete the package.

A clear indication of this PC's target audience comes from the fact that it's bundled with both Windows 7 and Windows 8.1, enabling businesses to choose which OS to embrace – and of course you'll be able to upgrade to Windows 10 for free.

Surprisingly perhaps, HP has bundled a number of applications that some could label as bloatware: CyberLink Power2Go, PowerDVD BD Edition and Foxit Phantom PDF Express. As expected, HP also throws in some of its own apps, namely Recovery Disc Creator, Recovery Manager, PageLift, File Sanitizer and so forth.

As for benchmarks, we were pleasantly surprised by what we saw considering that upgrading to this computer could cost less than £100. We recorded the following benchmarks, and the scores were slightly higher than the HP 260 G1 in most cases as a comparison: