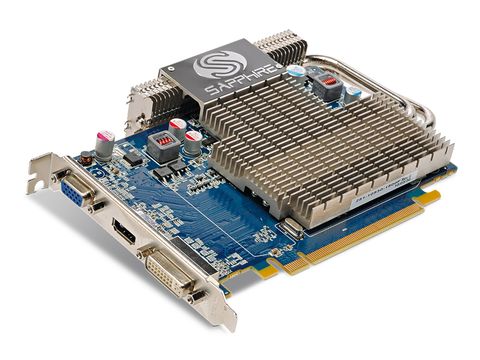 You can tell the Sapphire 5550 Ultimate isn't a high-end graphics card from the off; the box isn't a ridiculous size.

Perhaps at under a third of the price we shouldn't be too surprised. We had to drop the games to 800 x 600 and turn off the fancy stuff to get a decently playable frame rate, if you think 40ish frames properly playable.

Modern game engines are so effective that even such a modest card still looks pretty good, but only if you don't know any better.

Its claims to be a DX11 gaming card don't really cut much ice. The 'Ultimate' part of the tag denotes the passive cooling, although the box does say that the "use of a fan inside the system case is required". So you still need to keep air moving mechanically somewhere. In our test rig, open to the air, it reached 80º.

The 5550 ticks all the DX11 boxes, is CrossFire-compatible, and can make a reasonable fist of undemanding jobs, but it's neither one thing nor the other.

It's not got efficient enough passive cooling for media players, it's not got enough gaming oomph for 'proper' gaming, and it isn't cheap enough to be a real bargain. We're not sure, in other words, who would really want it.