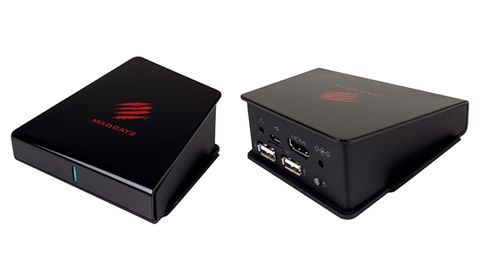 There's more than one console war brewing at E3 2013. In the shadow of the PS4 and Xbox One, affordable Android-based systems are all the rage. With the Mojo, peripheral maker Mad Catz is throwing its hat into the ring.

It's calling the Mojo a "micro-console" and says it runs a stock version of Android. Better yet, the Mojo will bring any and all Google Play, Amazon and Nvidia Tegra Zone purchases users have previously made into their living rooms. That means music, movies and, most importantly, games.

Everyone likes a free game with their new console, just look at Wii Sports. Google Play access could be the Mojo's biggest selling point.

Media, streaming services, apps, even word processors; anything you've bought on your smartphone or tablet the Mojo will bring to your television. That sets it apart from the biggest name Android console gaming, the kickstarting wonder Ouya, which will have its own ecosystem.

It's not necessarily a bad thing that Ouya is choosing to create its own storefront. In fact, if they run it well, it good be a real advantage. It's just the fact that purchases people have already made on Android won't be recognized.

As for release date and price, Mad Catz wouldn't get too specific. It's just saying "holiday 2013," and that the system will be "more than $100." While a lot of the details are being withheld, Mad Catz gave us plenty of play time with its new system.

The Ouya and the Mojo have more in common than odd names and an Android brain. When we sampled the Ouya at GDC 2013, we were struck by its small size. The Mojo is similarly demure, little enough to fit in your hand.

On the outside it's plastic and asymmetrically curved. Internally, it remains a mystery. Mad Catz wasn't ready to reveal the chip that will power the system, but has said that it will features "no less than 16GB of internal storage," and confirmed that it will support microSD expansion.

The Mojo will also be able to output in full 1080p, thanks to an HDMI connection. Of course, not every title in Google Play actually runs at a full HD resolution, but plenty of movies do. That and Netflix access will make the Mojo a nice competitor for set-top boxes like Apple TV and the Roku.

It also sports two full size USB ports and one micro USB. Our demonstration of the system used those connections to hookup a Mad Catz keyboard and mouse. However, Mad Catz made sure to point out that users will be able to connect any brand's USB accessories. Again, the Mojo's biggest strength seems to be bringing media and peripherals you already own into the living room.

The CTRLR: no vowels, plenty of Bluetooth

Mad Catz has a full catalog of headsets, controllers and fight sticks. Therefore it's no surprise that it plans to package its Mojo system with its CTRLR, the Bluetooth 4.0 gamepad of its own design.

The CTRLR gamepad reminded us of the controller S for the original Xbox. It felt a bit small in our hands, but otherwise very solidly constructed.

It was certainly a sturdier than the Ouya controller, which has a pleasant brushed metal exterior, but feels hollow and has mushy trigger pulls. Also, since the Mojo will work with any USB or Bluetooth gamepad, it'll be easy to toss the CTRLR to the side if you don't like it.

The CTRLR will also be sold separately, and has one more feature that shouldn't be overlooked: it packs a hinge that will let you attach a smartphone to it, just like a Moga Pro. However, unlike a Moga, it can't remain level while holding onto a Samsung Galaxy phone.

Still, the fact that Mad Catz has added this feature to the CTRLR like it's no big deal could raise eyebrows. The CTRLR does seem to be the more versatile device; if the price is right it could spell trouble for the Moga.

Even if its not your gaming preference, dedicated media buttons and a mouse mode - letting you drive the cursor with a thumbstick - will make it good to have around. We do wish that it had a built in rechargeable battery pack instead of two AAAs, but if it gets anywhere near the 40 hours of battery life Mad Catz is claiming, that will be a somewhat moot point.

Hitting the logo button in the middle of the gamepad returns you to a familiar Android home screen. Here you'll find Google Play access, as well as the Amazon and Tegra Zone market place. That gives the Mojo access to a variety of apps, even word processors. In a lot of ways, the Mojo is like a little living room computer.

While Mad Catz wasn't willing to reveal specs, the Mojo played a selection of Android titles admirably. Dead Trigger and Riptide GP, two more graphically intensive, both played flawlessly. The only game that didn't seem to be perfectly optimized was GTA III, which had a less than ideal framerate. We'd chalk that one up to the device's prototype status, though.

Ever since the Ouya struck gold on Kickstarter, companies have been tripping over themselves to launch Android consoles and controllers. You've got PowerA's Moga, the upcoming Project Shield by Nvidia, and now the Mojo by Mad Catz.

Each one is sort of its own beast, most especially Shield, with its ability to stream PC games over WiFi, so it's almost too much of an apples and oranges comparison to name a winner. We will say that if Mad Catz has one killer feature with the Mojo, it's the way the system connects users to content and peripherals they already own.

Having all your Android games and movies as soon as you plug in a Mojo is even better than getting Wii Sports in the box. However, since Mad Catz won't be opening its own store and taking a cut of app purchases, that means it has to make money on the hardware, and price it for profit.

As we mentioned, Mad Catz wasn't ready to name a price, but said the Mojo would be "more than $100." We'll have to wait and see about a firm cost, and get a system in for a full review, but we remain cautiously optimistic about the Mojo and the Android console rush in general.