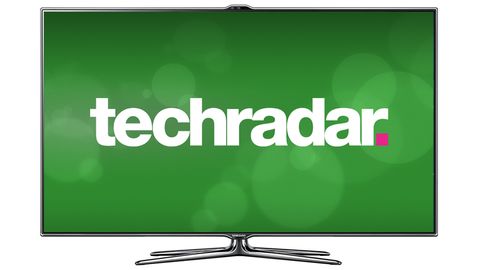 You are being watched. Like all members of Samsung's Series 7 and Series 8 collections of Edge LED-backlit LCD TVs, this 40-inch television has a built-in webcam. The advantages are many. Skype on the Samsung UE40ES7000 from the off, with no need for an expensive add-on camera accessory, is a bonus. But the other features enriched by that spy hole – housed in a ripple across the top of this super-slender screen – are less obvious.

As well as an app called My Mirror, which can record both video and stills of you watching the Samsung UE40ES7000 (eh?), that camera fuels this TV's all-new control systems, including face recognition (only as a gimmicky way to log in to a Samsung app), gesture control and – thanks to its nearby microphone – voice operation.

Although all those latter control features turn out to be a huge step forward, they will be familiar to anyone who's tried a Kinect. In fact, the tech itself is almost identical.

Just as impressive in terms of 'now' features is the Samsung UE40ES7000's Smart Hub (a clearing house for umpteen apps), its twin Freeview HD and Freesat HD tuners, and its Full HD and 3D-ready Edge LED panel. And, yes, it does come with 3D glasses – two pairs, to be exact, and jolly slim and lightweight they are, too.

Just 29mm in depth, a jaw-dropping design adorns the Samsung UE40ES7000 and instantly impresses. It's not unusual for Samsung to achieve such a svelte look, and other brands – notably Panasonic and LG – have now more or less annulled their rival's lead in the design department. But the Samsung UE40ES7000 remains a stunning attempt.

With a rather meaningless moniker of 'One Design', the Samsung UE40ES7000 features a metallic strip around the edges, curved in the corners, and rimmed by a recessed 6mm stripe of transparent plastic that leads away from the fine edging. There's also 8mm of black around the panel itself, though the perception is one of a TV with a very slim bezel.

Either side of the screen's centre is a convex lip housing both webcam/microphone and a subtly lit up Samsung logo (the latter won't be to a lot of viewers' tastes, we know, but it can be deactivated), with a chrome-effect, swivelling spider-style 'quad' desktop stand beneath.

The flagship 8 Series is next on the radar if you're after the ultimate in images, with more localised dimming, so more accurate, believable blacks and higher contrast) – the 40-inch Samsung UE40ES8000, 46-inch Samsung UE46ES8000 and 55-inch Samsung UE55ES8000 impressed us.

If you would like to spend a little less but still retain the key features (though you will have to forgo those modern control options), the 46.9mm-slim 40-inch Samsung UE40ES6800, 46-inch Samsung UE46ES6800 and 55-inch Samsung UE55ES6800 are good value alternatives.