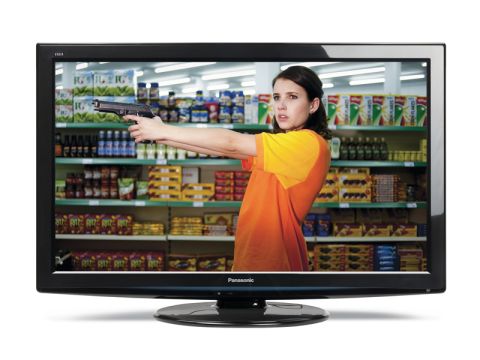 Freeview HD is a major plus, but it's a tad undermined by patchy pictures and an uninspiring feature list

Freeview HD IS about to explode. The World Cup is set to kick off subscription-free, hi-def broadcasting in earnest, and the amount of content on the platform will increase exponentially over the next few years. So having the brains to decode it, plus a 1080p panel on which to display it, makes the Panasonic TX-L37S20B about as future-proof as it's possible to be.

Aside from that tuner, and in the absence of any built-in internet widgetry, 3D capability or LED backlighting, the only other attribute likely to generate any serious excitement is Panasonic's own V-real Pro 4 processing engine, a sophisticated suite of picture tweaks widely regarded as one of the better examples of its kind currently on the market.

The socket count is disappointing in terms of HDMIs (of which there are just three), but it's redeemed slightly by the inclusion of an SD card slot for enjoying multimedia files either from the internet or from your personal computer.

On top of that you'll find the usual sprinkling of component video, two Scarts (both RGB) and an optical digital audio jack for sending the sound to external amplification.

The most avid spec-sheet scanners, meanwhile, will notice the intriguingly named CATS, or Contrast Automatic Tracking System, which on closer inspection reveals itself to be nothing more thrilling than a slightly fudged acronym (ACTS being the logical, if less seductive arrangement) for one of those now almost obligatory gadgets that monitor ambient light levels and adjust the screen's output to correspond.

This is a company that tends to pursue its own single-minded agenda rather than instinctively hop aboard whichever bandwagon happens to be passing. This mentality is reflected in its obstinate persistence with plasma and also here in its choice of user interface.

While other manufacturers are flocking to more graphical, icon-based styles in the wake of LG and Philips, Panasonic has stuck stubbornly to a more traditional method based on text and tables.

And when it works as well as this, there's little reason to change anything, particularly when it's linked to a more or less perfectly laid out remote control with large, clearly labelled keys that operate with a pleasingly firm action.

Video performance is fine, if you're careful what you feed this set.

Colour is impressive most of the time, with a wide, natural palette able to capture the trickiest tones more or less perfectly. Flesh tone are accurate, real world shades, such as grass or sky are spot on: a BBC HD preview for a programme involving Michael Portillo travelling up and down the country on railways captures the former MP's distinctive pallor perfectly, while the greens, browns and greys of the almost incessantly overcast scenery rolling by, will be instantly familiar to anyone who has ever stared out of a train window.

Black levels aren't bad, although our test disc of the frequently nocturnal The Day the Earth Stood Still did test the Panasonic's ability to breaking point.

The picture is on the noisy side, whatever the source quality, with Freeview occasionally, looking positively pixellated, while Die Another Day on Blu-ray was grainy enough to look far older than its 10 or so years.

Motion handling is really rather scrappy, 100Hz or no. Natural, deliberate movement, such as an actor walking across the screen, or a smooth pan across a field containing straight lines, is distinctly glitchy and there is often a visible haze around whatever is moving, particularly with standard-definition stuff.

Panasonic usually puts a bit more thought into its flatscreen audio than most of its rivals and the TX-L37S20B is a typically robust effort.

Its chunkier than usual chassis and a pair of relatively large drivers help it deliver a soundfield that is surprisingly airy and spacious. The volume tends to peter out towards the top end and the bass is far from bottomless, but it's a welcome change from the tinny, two-dimensional disappointment delivered by most modern wafer thin models.

This isn't the cheapest or best 37in set on sale at the moment by a long chalk. Panasonic rarely makes anything really duff and the TX-L37S20B definitely has its moments, but it exists in a slightly awkward limbo where it lacks the high-end chops required to impress dedicated videophiles but is perhaps too pricey to tempt buyers on a budget.

The Freeview HD tuner does count for quite a lot, but we're not entirely persuaded that it's enough in itself to warrant that fourth star.