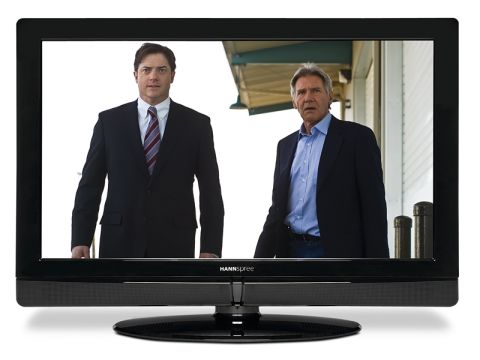 A reasonable set, but its black levels and motion handling let it down

Hannspree is perhaps best known for its novelty TVs, including sets shaped like footballs, but the manufacturer also produces more conventional and inexpensive sets like the ST321 we are reviewing here.

The affordable price tag makes the cheap build quality of the chassis and swivelling stand all the more forgivable, and Hannspree has even thrown in a cloth to remove the inevitable smudgy fingerprints from the plastic bezel.

You'll find a generous four HDMIs, one of which is on the side of the panel for easy access, while a VGA port enables you to hook the TV up to a PC and use it as a monitor.

Features are fairly sparse, but you do get the brand's X-Contrast and X-Celerate systems, designed to improve 3D rendering and reduce motion blur. Onscreen menus are extremely basic, but they are perfectly functional and logical.

However, while the layout is clear, the text and graphics could do with being a little larger to make them easier to read.

The remote control is heavier and more comfortable than the cheap plastic finish would suggest, but the buttons can be a little unresponsive and feel spongy when pressed.

Although a little softness is visible, the panel copes surprisingly well with pictures from Freeview, despite the relative low quality of the original broadcasts. Performance on BBC HD is also very impressive indeed, with the panel achieving a surprisingly good level of clarity.

However, the TV's X-Celerate 6ms response time doesn't seem to live up to its promises, as there is a considerable amount of motion blur, even on slow moving images.

The panel is rather sluggish when switching between inputs, but once the DVD player has finally been found, we're pleased to say that images are good.

Bright hues can appear a little gaudy on occasion, but colour reproduction is generally faithful and pleasing to the eye. However, motion blur continues to prove distracting.

Black levels are also a problem, with dark scenes almost completely lacking in texture and detail making it very hard to see what's going on. We also witnessed a significant amount of 'haloing' when viewing bright objects against a dark background.

A Blu-ray feed ups the ante slightly, with pictures becoming generally clearer thanks to improved sharpness, but the problematic motion handling once again rears its ugly head.