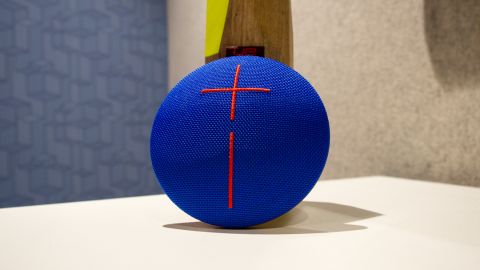 Whether you should get the Roll depends on what you expect to get out of a Bluetooth speaker for your money. If a visually-striking, acrobatic option is all you need, check this out. Otherwise, keep looking.

Most Bluetooth speakers try to look like traditional speakers. But to Ultimate Ears, or UE for short, that's just playing it safe. For the last few years, UE has pioneered the art form of making Bluetooth speakers that "pop" visually and best the competition with some impressive functionality. But so far, none of its speakers have stood out as stoutly as the new UE Roll.

It's shaped like a discus, but it's a fully-fledged Bluetooth speaker that's packed a familiar (if lighter) breadth in functionality. Sure, it looks cool, but is the UE Roll worth its $99 (£99, AU$149) price tag?

Yes, but it lacks some of the abilities that make its competitors easier to recommend.

The UE Roll is an unassuming Bluetooth speaker. Actually, if not for the large stitched "plus" and "minus" symbols, you might totally mistake it for a toy frisbee made for dogs. The design of the UE Roll borrows much of what we saw (and loved) in the UE Boom and applies it to this unique, circular form factor.

For review, UE sent us "Atmosphere", which balances a blend of red and blue on the front and maroon on its backside. You can nab the Roll in several different colors, all of which are just as vibrant as the next.

UE covers the tweeters with a fabric mesh that doubles as a protective grille. As mentioned earlier, the Roll's two most prominent design features are its volume controls, positioned front and center on its face.

Flipped over, the speaker makes a smooth transition from fabric to rubber. UE stocked this side with a few more features, one of which easily sets the Roll apart from the competition. The power button sits off the side of the speaker's apex and the Bluetooth pairing button is nested up against it.

To make no-look adjustments easier, UE made them feel different to the touch, one being convex, the other being concave. On the back, you'll also find a flap that, once you pry it up, is host to a 3.5mm input for wired listening and a microUSB port for charging the Roll.

At first, the UE Roll's design might make you think that it's destined to just sit flat. But the fabric coated bungee cord harnessed to its back makes this speaker incredibly versatile.

The Roll can easily lean up against a wall, but why would you do that when it can easily wrap its cord around a post, door knob or even a shower rod? It's gloriously simple, and gives you the freedom to position the sound as you choose.

The Roll comes packaged with a neon microUSB cable for charging and what UE calls a "floatie." It's an inflatable floatation device to let this speaker float about on water, should you be have a pool party in need of some tunes.

Similar to the UE Boom and the now-discontinued UE Mini Boom, the UE Roll experience is enhanced with the companion app for Android and iOS. It can power the speaker on or off remotely, the equalizer can be adjusted and, if you have another UE speaker, you can pair the two together for stereo sound. None of these features really do much to make the offering totally irresistible, but any extra bit of functionality is welcomed.

The low-profile build and useful bungee cord of the UE Roll make it a useful at-home or on-the-go audio companion, but those features alone can't make it a must-have. It has to pump out audio that you'd expect for your money, and it does. For $99 (£99, AU$149), this slim, disc-shaped speaker pushes out a surprisingly powerful sound.

That said, the UE Roll's audio performance isn't stellar. The bass department doesn't pack the same "oomph" that I liked in the UE Mini Boom. If you can overlook the lacking low-end, there's plenty of richness to be found in the mids and highs.

Using the Roll is simple and easy, but there's not much to do with it. Aside from pairing up your device over Bluetooth, the only other physical buttons are the volume controls and power button.

As much as this sounds like something to knock UE for, I actually enjoy the "set it and forget it" nature of the Roll. In fact, the free companion app puts every one of the speaker's controls, plus some extras, on the smartphone screen. This is convenient if you've stuck the Roll in a hard-to-reach spot.

The Roll's battery life, while not award-winning, is strong with an advertised nine hours. I was able to squeeze more out of it, just under 12 hours throughout a week of use at a medium volume.

My studio apartment is approximately 30 feet from front to back, and the UE Roll's wireless range didn't even seem to be strained by that length. This leads me to believe that the advertised 65-foot wireless range is an easy feat. The speaker is also waterproofed with a IPX7 rating, meaning that it can kick it in the water for a half-hour at up to one meter of depth.

It's unfortunate that the Roll is replacing the Mini Boom in UE's lineup of speakers, as it's missing some of the key features that made the Mini Boom such a good deal. Most notably, the UE Roll is missing a built-in microphone, so taking calls just isn't possible. Also, UE left out the NFC connectivity in the Roll. I wouldn't have an issue with these omissions had they not been present in the Mini Boom for the same price.

The UE Roll is a playful take on a Bluetooth speaker that won't find much competition in the visuals department, but is that reason alone to buy it? It depends on your taste. But if you're looking for a killer value, the Creative Muvo Mini can provide 10 hours of battery life, full sound and waterproofing for $59 (£49, AU$69.)

Still, the Muvo Mini can't go everywhere the Roll can. Its bungee cord makes it an option that can cling to places that most portable speakers can't. Plus, the companion app offers several additional features, some of which are useful and others that aren't.

The Roll's greatest flaw is that it replaces the Mini Boom, but brings fewer capabilities to the table. This may be an iffy value, but the Roll is nevertheless a remarkably attractive speaker that can rock out with fairly balanced sound.