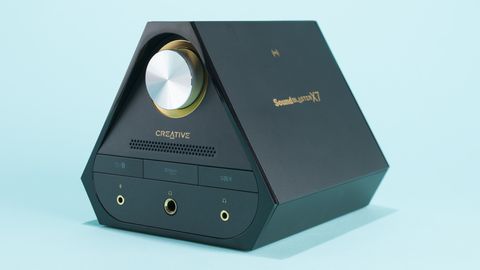 The X7 might be the missing link between audio and video in the gaming space, but is a discovery few will make at its extravagant price point.

Despite what the lack of products on the market currently indicates, gamers actually like high-end audio just as much as they appreciate high-end visuals. Creative, the team behind the immaculate Creative EVO ZxR headphones and Creative Roar SR20 Bluetooth speaker, looks to bump up gamers' audio options with a line of premium audio products.

At the top of the dogpile is the Creative Sound Blaster X7, a desktop-meets-home theater hybrid amplifier that sports a Burr-Brown PCM1794 127dB digital-to-analog converter (DAC), and supports high-resolution audio playback of up to 24-bit 192kHz. I call the X7 a hybrid because it connects via USB to a PC or Mac, runs signal from your TV using optical audio and connects easily to your phone using its built-in NFC chip and Bluetooth 4.1.

And if hi-fi isn't your scene, the X7 also works as a mighty powerful, 600-ohm headphone amplifier that supports two sets of cans simultaneously. It's so serious about two-driver audio that it even comes with a detachable headphone stand.

Whether you prefer a mouse and keyboard or a controller, the X7 is an awesome addition to your home audio arsenal. There is a caveat, however.

You might end up with more audio than you know what to do with (trust me, it can happen) and, as a tradeoff, have less money to spend on the games you love. The X7 costs $399 (£329.99, AU$459.95) – and that's before you buy a pair of kicking bookshelf speakers or quality headphones to go with it.

It's hard to dislike the X7's prism-shaped exterior. At 6 x 5 x 5.5 inches (W x H x D), it's a bit on the bigger side. But, so long as you have an extra cabinet in your entertainment center or room on your computer desk, the jet-black X7 inconspicuously blends in with any surrounding.

Turn the X7 around and you'll find just about every sort of audio input you'll ever need. Now, before you go out and buy a 7.1 – or, god forbid – a 9.1 system, know that the X7's max output is 5.1 channels, which is a serious potential flaw if you're weighing the X7 against a standard receiver.

Critiquing amplifier performance is pretty nebulous, as it ultimately depends more on your personal speaker setup and A/V aspirations than it does on the unit itself. That said, the included op-amps – a New Japan Radio NJM2114D and Texas Instruments LME49710 – created a squeaky clean, warm sound. If you're looking for a different signature sound, you can swap out the op-amps at any time.

Admittedly, the best-sounding setup I had while testing the X7 was when I was using a pair of ultra-fine Cambridge SoundWorks speakers lent to TechRadar by Creative. When I switched to something a little more plausible, like the Razer Leviathan sound bar, the difference in sound quality was less pronounced.

Ultimately, your experience with the X7 will depend on what speakers you're willing to shell out for. Sadly the X7 can't do much for the cheapo pair of 5W Logitech speakers you get with the purchase of a new PC.

I went on to test the X7 with a sound bar, a pair of bookshelf speakers, Klipsch earbuds and Beats Studio Wireless headphones. Each time, the music sounded better through the amp than it did coming directly through my phone, but the difference in most cases was minimal.

If you've used a Creative piece of hardware in the last few years you'll no doubt be familiar with Creative's line of Sound Blaster control center apps for PC, Mac, iOS and Android. The X7's desktop app is a little cleaner than most, and the mobile apps are easy to use.

With Creative's software, you can manually change your speaker setup, run some quick diagnostic checks and turn on Scout Mode – an effect that amplifies footsteps in first-person shooters – as well as mess around with the X7's equalizer. Overall, the software is functional, easy-to-use and fairly quick to setup.

At its best, the X7 can be used in conjunction with rock-solid bookshelf speakers or full 5.1, home-theater-in-a-box systems and noticeably improve your experience. It's clear that the X7 is packed with more features than were ever possible in a standard sound card. And, considering the X7 combines a DAC, Bluetooth receiver, amplifier and headphone amp into a single box, it's sure to save you space on the shelf.

That said, for the gaming audience, 400 smackers is nothing to sneeze at – more than even the PS4 or Xbox One. Plus, bringing the X7 to its fullest potential requires at least mildly powerful bookshelf speakers, adding even more to the already expensive asking price.

If you're a gamer who loves the sound of a game more than its graphics, the X7 should be your first upgrade after you've built that new gaming rig. (Assuming you have cash left over.) But if you'd rather get clear audio at a fraction of the price, consider a complete solution, like a sound bar or a 5.1 speaker system instead.