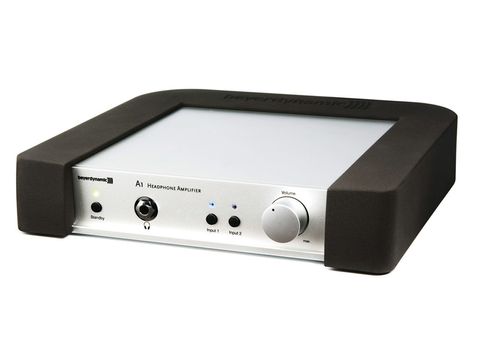 It may be pricey, but the sound quality is fluid, controlled and endlessly listenable

The mission for Beyer's A1 is all about bringing wideband audio to the headphone enthusiast. The entire circuit has been designed to transmit 96kHz signals, making it ideal for SACD, DVD-Audio or other high-resolution audio formats.

Against its rivals, who often seek a mellifluous, valve-like sound, the Beyerdynamic A1 has studio-like neutrality as its design concept.

In a similar vein, the A1 is styled for practicality rather than flamboyancy. When it comes to electronic engineering, though, the heap amp is meticulous.

In addition to offering a claimed frequency response of 1Hz – 100kHz, the A1 is similarly generous with headphone impedance. A 30 – 600ohm range is enough to cover all but the most obscure partners.

Unlike a few rivals, though, there's only a single headphone output. Neither is there a USB socket, which can be handy if using your computer as a music source. Countering these deficits are twin audio inputs. These are operated by a microprocessor controlled relay to avoid switching noise when changing input.

You might not think this is a big deal, but when you regularly use headphones, anything that avoids clicking and buzzing so close to your ears is to be welcomed. One of these inputs is looped with a passive output, allowing you to loop the sound through the amp without having to switch it on.

All connection sockets are via gold-plated RCA phonos and not balanced XLR, which given its pro-leanings, is slightly unexpected. At least a very substantial phono lead is included in the box.

Whereas some rivals feature slabs of wood or glowing valves, the A1 looks a little dour by comparison. Just a Nextel, grey or orange damping sleeve spices up the plain silver case.

The styling may not be inspired, but the build quality is impressive. A thick, aluminium fascia fronts a sturdy casing. Inside, the Noratel toroidal power transformer looks up to the job of providing a wide frequency response, as do the four transistors that are mounted on a solid aluminium heatsink.

The good-quality ALPS volume pot with aluminium knob feels smooth and precise; an important aspect with headphone amps as a small adjustment to volume is more noticeable when the sound is millimetres from your head.

In terms of value, the Beyerdynamic looks a expensive next to rivals such as the Chord Electronics' Chordette Toucan (£800) and Lehmann Audio's Black Cube Linear (£665).

It's not just the sound the A1 makes that impresses; it's also the silence. Given a suitable recording, this headphone amp recreates inky depths of silence that's the preserve of the very best amplification.

At all times it sounds immediate and transparent. Bass is taut, deep and well integrated. Musical detail such as subtle cymbal decay is finely etched. The downside of such openness is that static pops and clicks on the record appear amplified; as do poor recordings.

The A1 certainly won't put a gloss on inferior recordings. That said, this is not a mechanical-or harsh- sounding amp. Vocals sound intimate, textured and flow with lucidity.

In addition to great accuracy, the Beyer can claim broad sound staging to its credit. Whatever the price of headphone, the A1 seems to extract the very best from it in terms of separation and ultimate width of sound.

Beyerdynamic has achieved its aim of accurate, wide-band sound quality. That it has done this without making the A1 sound clinical is to be commended.

In addition to sounding dynamic, detailed and transparent, the A1 also demonstrates fluidity, balance and the ability to keep the listener enthralled for many hours without fatigue.

What the A1 won't do is flatter poor recordings or source components. Neither is the sound as mellow as some valve-powered rivals. Whereas this is hardly a fault with the Beyer, the price is.

Rivals costing several hundred pounds less run it very close indeed. With that in mind the mighty A1 deserves a qualified recommendation.