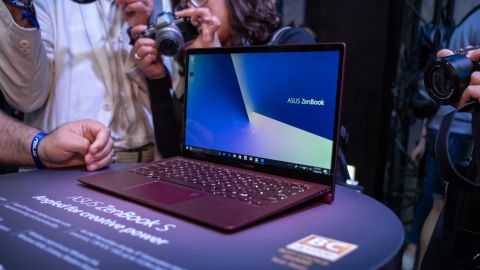 The Asus ZenBook S isn’t the world’s thinnest, most affordable or even a 100% uniquely designed laptop, but it still looks like the Ultrabook to treat yourself with right now.

Asus has pretty much mastered the Ultrabook category, so it was inevitable that the company would create something a little crazy – and so enter the Asus ZenBook S introduced at Computex 2018.

On first blush, this 13-inch Ultrabook might look like any other Asus has produced before, but then it rears up to be one of the most ergonomic and efficiently cooled laptops we’ve seen in some time.

The Asus ZenBook S strikes an imposing figure when its open. Thanks to its ‘ErgoLift Hinge,’ the laptop’s screen lifts upward by more than a full inch to better meet you at eye level. Meanwhile, the rear end of the screen lid, pitches the keyboard at a 5.5-degrees to simulate a desktop typing experience.

After going through these two transformations, this Ultrabook feels a lot more comfortable to use than many of the other laptops we’ve used in the past – with the exception of the Dell Adamo XPS, which brought forth the very same design as the ZenBook S nearly eight years ago.

Beyond the creature comforts this design provides, Asus claims the ErgoLift Hinge allows for better cooling. Rather than simply having the laptop just sit on a surface and heat it up, the extra space beneath the ZenBook S allows it to pull in more cool air and expel heat through the hinge. We don’t know if it actually works in practice, but we look forward to not resting a hot laptop against our thighs.

Asus claims the ErgoLift hinge also enhances audio by angling the bottom-firing speakers. The laptop also features a smart amplifier that automatically maximizes volume for top-notch sound quality. Again we weren’t able to really test this feature in the middle of the busy and noisy press event, but Asus reasoning seems to be sound.

Lastly, the ZenBook S’ fancy hinge also plays into minimal 5.9mm NanoEdge bezels around the screen. By moving the hinge up, Asus has basically cheated its way out removing this laptop’s fat chin. However, in this process, the ZenBook S has an effective 85% screen-to-body ratio, so all you see above the keyboard is really just the screen with a barely visible border around it.

Despite its ultra-thin formfactor, the sports the best components found in any of today’s hottest Ultrabooks. This includes up to an Intel Core i7-8550U processor with Intel HD Graphics 620, 16GB of DDR3 memory at 2,133MHz and 1TB of PCIe SSD storage.

Base models will likely come with less storage and memory as well as a lower-tier – but still entirely serviceable – Intel Core i5-8250U CPU.

During our brief time with the device, the Asus ZenBook S seems to have no problems launching applications and making Windows 10 feel zippy.

As ever, this Ultrabook features Asus’ almost-too-vibrant screen. But now it also comes paired with its Tru2Life video technology, which enhances contrast, sharpness and playback smoothness through pixel analysis. After seeing a few video clips, we’re convinced this laptop will make a great streaming video device.

Asus proposes that the ZenBook S will last a whopping 13 and a half hours on a single charge, but we’ll remain skeptical of that claim until we perform our own testing.

The Asus ZenBook S isn’t the world’s thinnest, most affordable or even 100% uniquely designed laptop – but that doesn’t really matter.

With a reasonable starting price, smart design choices and some truly awesome color options, it still looks like the Ultrabook treat yourself with now.

But before you do, you should hold tight for our full review coming within the coming months.