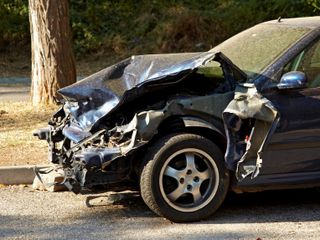 Monitoring your kids' every move might stop this happening but at what cost?

CES has barely begun and we're depressed already: the good people at Blackline GPS are showing off their Young Drivers Report Card, a GPS-based monitoring system that ensures you'll never have to trust your teenager again.

According to the blurb, you can "monitor average speed, amount of time driven, excessive speeding, curfews and more with the report card linked to a personalised key fob", and the system can "issue reports on driving history as well as monitor the location of your young drivers".

The angle is, of course, safety - although if your teenager is driving your Nissan Micra off a cliff while off his or her face on horse tranquilisers, we're not entirely sure what the GPS is going to do to stop it - but it's a sign of how tech is changing the balance between parents and teenagers.

When we were in our teens the deal was pretty simple. We were innocent until proven guilty, not because our parents were particularly tolerant people but because they weren't superheroes. They knew they couldn't stop us from doing dumb things or even things they didn't fully approve of, so they tried their best: they'd try and knock some sense into our thick heads, and they'd pick up the pieces when we ignored their advice and made a complete mess of things.

With today's tech, though, they can be superheroes. Parental controls are in everything. They're in your Sky box, in your games console. They're in Windows 7 and Snow Leopard. If they want to, your folks can even prevent you from doing anything vaguely interesting or useful on your iPhone in case you might see a word such as "tits". And now they're in your car.

We suspect there are probably three kinds of parents: the ones who go parental control crazy, sticking GPS modules into anything that moves and programming the Xbox to make damned sure their little angel doesn't get to play Left 4 Dead one second before their eighteenth birthday; the ones who don't use parental controls or GPS at all, preferring to treat their kids like adults and hope they respond in kind; and the ones who don't do anything because they don't care.

What does it say about your parents' belief in your abilities, about their trust in your judgement, that they feel the only way it's safe to let you outside is to tag you like a criminal?

Mark our words, it's going to backfire. If your message to your kids is that they can't be trusted, they'll live up to your low expectations. As soon as your kids realise they're being watched, they'll start messing with you.

The GPS will show the car parked outside something wholesome, such as a church or worthy youth group, while your pride and joy's dressed as Hitler, going sideways into an orphanage in a hot-wired police car.

Liked this? Then check out Young people don't care about their online image