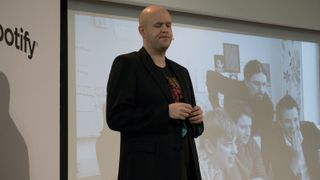 Spotify CEO Ek has downplayed a possible IPO before

Spotify, the popular online music streaming service, could be looking towards an initial public offering, according to a report by Reuters.

The firm is recruiting a financial reporting specialist in the US, adding to growing suspicion that Spotify is preparing to list its shares.

Should it go ahead, a Spotify IPO could be valued as much as $8 billion, and might see a surge of other tech companies offering stock to the general public, including fellow Swedish company and makers of Candy Crush, King.

Music to a broker's ears

Spotify will be following the footsteps of internet giants Facebook and Twitter who, despite initial bumps along the way, have seen share prices soar. The Swedish music company raised $250 million in funding last November, earmarking it as one of the world's best-funded capitalised startups.

The company has declined to comment on whether or not an IPO may be in the offing, instead iterating that it's looking for people who can keep its financial reporting up to global standards.

Founder and CEO, Daniel Ek, had previously downplayed a possible listing of the company to the Swedish media, but strong sentiment from investors and increased tech shares for other companies may have had some say in changing his mind.