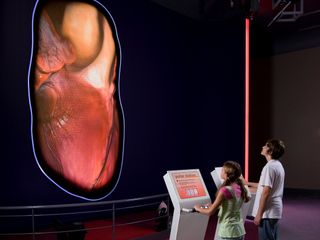 New 13-foot tall human heart exhibit lets you see and hear your own heartbeat like never before (image credit: JB Spector, Museum of Science and Industry)

3D projection specialists at British design house 7thSense, have supplied much of the tech behind a new 13-foot virtual 3D human heart that beats in time with your own.

The Giant Heart is part of the YOU! The Experience exhibit, that opened this month at the Chicago Museum of Science and Industry.

"Across the front of the Giant Heart is a large steel surface, which has a seamless moving image projected onto it by two F12 and three F22 high-resolution projectors," 7thSense informs us.

Ian Macpherson, co-founder and director at 7thSense, explains a little more about the complex 3D tech behind Giant Heart: "For this project, we used four Delta servers configured in Mesh Mode, into which a custom 3D mesh and movie texture from XVIVO, is read and can be placed in 3D space, exactly where the physical mesh is located in the real world.

"Virtual projectors are placed around the mesh where the real projectors are located, and the resultant output from the multiple PC cluster is geometrically matched to the real world, so that little additional distortion correction is required. The Delta outputs are soft-edge blended to bring the projected images into a single, seamless image."

Users can switch between different movies such as a default general anatomical view, blood vessel highlighting, and a special 10-second infarction movie to show what happens during a heart attack.

"Because any of these movies can be selected at any time, we engineered a flexible Sequence Control mechanism which can swap out movies without pausing," explains Macpherson. "Since we are serving a 2200 x 4000 movie from each PC, this is not a simple requirement, but by creating an innovative mechanism of swapping from high-resolution via a low-resolution version, we allow the visitor to see a 'smooth fade' from one movie to another, without pausing."

Perhaps the coolest feature of Giant Heart is its ability to synchronise its beat with that of the guest, "so that the audio and video of the pre-programmed movies are matched to the visitor's heart rate, as read into the system via two handgrips on the touch console."

For more on the Giant Heart, check out www.msichicago.org/you