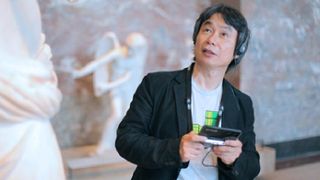 With most of the TechRadar team at the Gadget Show this week and one nameless member nursing a broken foot after sky-diving from 30,000 feet to save a damsel in distress and landing on the hardened steel roof of some Bond villain's lair*, the office has been emptier than usual. But that doesn't mean that One More Thing isn't as full with the strange and weird side of tech, it is as you will read for yourself.

*He fell off a kerb.

Museum piece – Nintendo's Mr Miyamoto wandered the many corridors of the Le Louvre Museum in Paris this week using his 3DS as an interactive guide. He did this to promote the fact that you can now rent the console from the museum and it will interact with the exhibits.

Farm-evil – The maker of Farmville has a stalker and it has cost him over $1 million in security so far to make sure that he is safe in the real world. Personally we think it may be a pig – we've never trusted this breed of animal since reading Animal Farm at school [Kotaku]

Wolf whistle – that sexy computational engine known as Wolfram Alpha is up to its old tricks again, with news that the search service will break down the works of Shakespeare and other literary luminaries for you. You mark our words, this is how the apocalypse starts. [Engadget]

Mellow yellow – We are not going to lie, there's no tech in this story whatsoever but Matt Groening has finally revealed where in America Springfield is. And as The Simpsons is made on computers, we are shoe-horning this into One More Thing. Come on, have a heart. It's The Simpsons! [Gizmodo]

It's a Pirate's life for me – The Pirate Party is so very close to an historic election win that it has already broken out the rum and sang three sea shanties in celebration. That and enlisted the help of Roger the Cabin Boy. [TorrentFreak]

Like is like a box of chocolates – Microsoft has decided that Facebook is the place to show off its creative skills and has created an interactive Timeline movie for the site. And, we have to admit, it's actually pretty awesome. [The Verge]

Class in a glass – Google's Glass project may not be out yet but some brainy so and so has created their very own version of the augmented reality glasses. They obviously have far too much time on their hands. [The Verge]

Seeing Red – Virgin Media loves the colour red so much it has finally gotten itself more content on the red button. This time from the folks behind BBC Sport and BBC News. Expect F1 coverage and more. [The Next Web]

Google's gone to Iceland – Fed up with exporting fish, Iceland has decided that data storage is the way forward and is now putting itself forward as the foremost nation in all things data. [Technology Review]

Web privacy – A man in the US is promising to create the world's first surveillance free ISP. So private that even its member won't know they ore on it. Or something. Regardless, Nick Merrill believes his ISP will be completely FBI proof. [CNET]