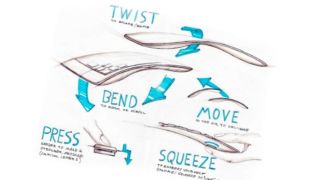 Keyflex - the bendy keyboard proves to be a winner

Microsoft has announced the winner and shortlisted entries from its inaugural PC Hardware Design Project with Central Saint Martins College of Arts and Design.

The competition is one that is meant to offer up ideas of how technology can be best used in the future, with this year's 'future' designs to focus on new ways of looking at computer interaction.

The winner was 24-year-old Victor Johansson, from Sweden, who came up with a brand-new gaming keyboard concept.

Called Keyflex, a user bends, squeezes, twists and flexes the device to control it. His design shows that you can assign different bends to each function, and to share or like something on the web you have to squeeze the sides of the keyboard.

"I was particularly impressed with Victor Johansson's design as he successfully met the overall goal of the programme and really showcased a possible future trend which addressed a clear consumer need – a quality that is at the forefront of all Microsoft design thinking," noted Smith.

In all there were 12 finalists – four of which caught our eye:

These gloves were created with designers in mind and have a variety of modes, depending whether you are inside or out.

This electrical AV interface is primarily designed for use with a guitar and enables an experience similar to that of a professional using in-ear monitors and volume control. And it's got a design that's very Apple-esque.

For some reason, bendiness was in this year and this time it comes to a camera – we are not really sure twisting the camera to zoom will catch on though.

This one's for the stalkers out there – it tracks your movements and then sends them into the virtual world so those on Skype and the like can feel like they are with their loved ones.