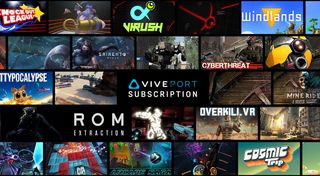 Got your sights on the Vive Focus Plus, but worried that the standalone headset will only give you access to a limited selection of VR games and titles?

HTC may have a solution, in the form of a PC-to-headset streaming feature that will give the cordless VR headset access to over 2,000 VR titles over 5GHz Wi-Fi – instead of just the 200 or so in the Focus Plus' onboard store.

The Vive Focus Plus launched earlier this year as an update to the similarly standalone Vive Focus headset – though this time with two 6DoF (six degrees of freedom) controllers instead of the original's single 3DoF input.

The ability to wirelessly stream titles will be something of a boon given the limited 32GB onboard storage, though we're yet to see how well this will work in practice.

VR titles will require a lot of data to be transferred over the air, and there's a reason commercial headsets tend to either feature onboard / downloaded titles, or be hooked up to a high-performing PC instead.

While high-end VR headsets, like the next-gen HTC Vive Cosmos, will certainly still require a wired connection to show off VR titles at their best, the  strategy of the Focus Plus may start to pave the way for mainstream VR streaming – though it likely won't be able to compete performance-wise until 5G gets into the picture.