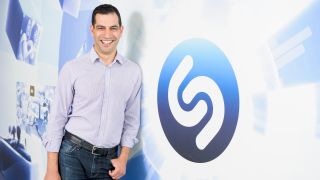 What is that song? It's a simple question but one Shazam has built an audio-recognition empire on, having answered it billions of times through its app.

It was first answered on 19 April 2002. T Rex's Jeepster was the very first tag, when the service was then called 2580. Skip to 2013 and the 10 billionth answer was given this month as Lady Gaga's Applause.

"It took 10 years for the first billion, 10 months for second and two months for the last billion," explained Shazam's Chief Product Officer Daniel Danker to TechRadar, who puts Shazam's immense popularity down to smartphone growth and the service "being an inherent behaviour now".

"The other day I was in a restaurant and it played great music. They were playing a few recognisable songs but when there was one that wasn't I could see three people 'Shazaming' it," said Danker.

"When it is that embedded in people's lives then it is easy. Shazam is fun and simple and it just works."

According to Danker, 500,000 songs a day sold are sold through Shazam, which equates to around 10% of digital music in the world sold.

"When you hit these numbers, artists think of you in a very special way," he said.

"There is intent with Shazam. If you are in the search business and someone is looking for a vacation in Barbados that is intent and we have a similar thing and that is hugely important."

'Simplicity' and 'intent' are the key features needed, believes Danker, for Shazam to expand beyond the music space and into the TV one.

Shazam's chief product officer has only been at the company for four months, but his move from the BBC where he was key to the success of the iPlayer and Red Button technology, is telling of where Shazam is going.

According to Danker, it wants to take the success of what it has done in music and apply this to the TV industry.

"When you are reaching more than 70 million users a month you have got an incredible platform. What we are doing now is shifting that energy to television," he explained, before correcting himself by saying: "Actually shifting is the wrong word to use, as we are scaling up what we are doing on music, then using our technology to build a business in television."

This was seen last September with the announcement that Shazam's technology would now work with all US TV, offering up relevant show information through the service. Although Shazam for TV has yet to reach other shores, Danker believes a lot has been learned from the experience.

"We started with a ubiquity bed, where you could Shazam any show on 160 channels. This was so we could start learning what people are doing when you have that canvas. That, for us, was a great platform for data," noted Danker.

"What we learned was that 85% of Shazam's users, Shazamed television. That's not because they are Shazaming soap operas but they are unsurprisingly starting with Shazaming music on these shows. So, we have started adding calls to actions on programmes and to adverts. You are going to see a lot more of this too."

Shazam has cropped up on some adverts globally. It was used recently on the commercial for the Jaguar F Type, but it will be a bit of a wait for TV show recognition to appear in other countries.

"The US is a fantastic market to start in television, though. But I want to see us in a bigger and bigger role in the conversation of how television is commissioned, created and distributed."