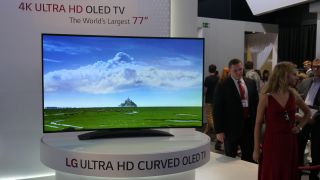 LG and Samsung are to stop bickering over OLED and LCD patents and work together to produce the next generation of displays.

Samsung Display and LG Display, subsidiaries of the two Korean technology giants, have been 'courting' each other for a while now, with lawsuits surrounding LCD patents.

But this bickering is expected to end now both companies have revealed that they want to look to cooperate rather than continually hauling themselves through court case after court case.

A statement by Samsung Display explained that this change of tack was all about being more globally competitive.

"It was agreed that we two should focus more on cementing our leadership in the global market by cooperation, instead of engaging in all-consuming patent disputes," noted the statement.

LG's statement echoed these sentiments, explaining: "What's most important for both of us is upgrading our competitiveness globally."

Ahead of the curve

Over the last few years IFA and CES have proven to be brilliant battlegrounds for Samsung and LG. This year, both companies showed off curved OLED displays, while there has always been oneupmanship over bigger, thinner and brighter screens.

While we expect this to continue, it will be interesting to see Samsung and LG allowing technological advancements, rather than hindering them with patent trials.

Samsung and LG are currently number one and two respectively in the TV market, as well as being two companies that offer up OLED technology for smartphones.