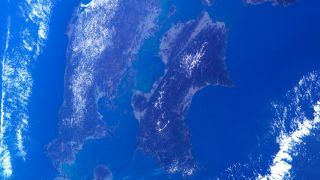 It's no longer just Nikon and Hasselblad that can boost that their cameras have gone into space – now Sony can too.

An Alpha A7S II full-frame mirrorless camera has become the first commercial camera to be mounted outside the International Space Station (ISS), and has captured some mesmerising 4K footage of Earth.

The video above shows the Japanese islands, while the video below captures the US East coast at night. The footage was captured using a Sony FE PZ 28-135mm f/4 G OSS power zoom lens.

The Alpha A7S II was selected as the camera for the exterior platform on the ISS's Japanese Experiment Module (known as KIBO) after a series of tests were carried out to see how it would cope with the harsh environment of space. Among the deciding factors were the camera's excellent high-ISO performance (it has an ISO ceiling of 409,600) and ability to shoot high-resolution 4K video.

After being couriered to the ISS by a Japanese cargo transporter in December, the A7S II was installed in February. At some 250 miles above the surface of the Earth, the ISS completes an orbit approximately once every 90 minutes.