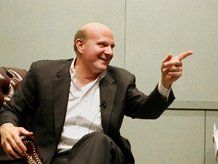 We've thought for some time that the next 24 hours will be when the beta of Windows 7 breaks cover; a result of tonight's Steve Ballmer keynote at CES (18.30 PST, 02.30 GMT).

But rumours circulating around CES seem to be suggesting that this beta will be the only beta release, with a Release Candidate appearing in the second half of the year.

Windows Vista had two beta releases, the second being publicly available. The Windows 7 beta will be available to all, too.

We've also heard tell that this may mean a pre-Christmas launch, following on from a Q3 RTM (Release To Manufacturing) date. However our money is still on the end of January for the full launch. That would be a full three years after the launch of Windows Vista and seems the most likely option to us.

One thing is for sure; the headlines of this CES are certainly up for grabs, so expect much more detail on Windows 7 in the keynote. After an underwhelming Macworld speech, excitement is what we're all looking for (though LG's watch was pretty cool). As you'd expect, TechRadar will bring you the full skinny, including a keynote report and full analysis.