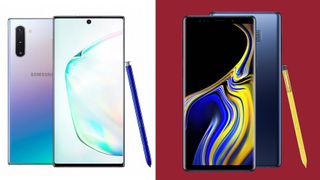 While we can’t answer that for you, we can help you decide, as well as generally running you through the many similarities, and even more numerous differences, between these two handsets.

So read on for a thorough look at how Samsung’s new phablet flagship compares to its previous one.

The Samsung Galaxy Note 10 and Samsung Galaxy Note 9 both have a glass front and back, along with a metal frame and a curvy screen. They’re similar in a lot of ways, but while the Note 9 had prominent bezels at the top and bottom of its screen, the Note 10 is virtually bezel-free, thanks in part to the front-facing camera being housed in a punch-hole cutout rather than above the display.

Other differences include the headphone port (the Note 9 has one while the Note 10 doesn’t), and the colors, with the Samsung Galaxy Note 10 coming in Aura Glow, Aura Black and Aura Pink, while the Samsung Galaxy Note 9 is available in Metallic Copper, Lavender Purple, Ocean Blue, Midnight Black, Pure White and Alpine White (though not all colors are available everywhere).

That’s partly down to its larger bezels, but partly because the Note 9 actually has a larger screen at 6.4 inches, compared to the 6.3-inch display on the Note 10 – for a truly massive new Note phone you’ll need to opt for the 6.8-inch Samsung Galaxy Note 10 Plus.

However, the Samsung Galaxy Note 10 does at least support HDR10+, which is a slight upgrade on the Note 9’s HDR10 support, and both phones have AMOLED displays.

With the Samsung Galaxy Note 10 you get three rear cameras, headlined by a 12MP wide-angle snapper which can switch between apertures of f/1.5 and f/2.4, and which has optical image stabilization (OIS). Then there’s a 12MP f/2.1 telephoto lens with OIS, and a 16MP f/2.2 ultra-wide lens, which lacks OIS.

The Samsung Galaxy Note 9 has just two rear snappers, one of which is the same 12MP variable-aperture one as the Note 10 has, while the other is a 12MP telephoto one with an f/2.4 aperture. That aperture might mean the Note 9’s telephoto lens won’t fare as well in low light, but we’ll have to put the Note 10’s camera to the test to be sure.

If you were hoping for a massive battery in the Samsung Galaxy Note 10, you’re going to be disappointed, as it has just a 3,500mAh cell. That’s not particularly big for a phone of this size, and it’s also smaller than the 4,000mAh battery in the Samsung Galaxy Note 9 – although as noted above, that phone has a slightly bigger screen to power, so it won’t necessarily last longer.

In practice we found that we could comfortably get over a day of life from the Note 9 with moderate use – you’ll have to wait for our full review to see how the Galaxy Note 10 holds up.

If nothing else though, you should be able to charge the Note 10 faster, because as well as having a smaller battery it also supports 45W fast charging, while the Note 9 tops out at 15W – although the Note 10 doesn't come with a 45W charger in the box, so you’ll have to pay extra to get the highest speeds.

If you live in the US you'll get Qualcomm's Snapdragon 855, while those in the UK and various other countries around the world will get Samsung's newly announced Exynos 9825. That's Samsung's first 7nm chip, and, the company claims, its most efficient yet.

It doesn’t have more RAM though, as both phones come with up to 8GB of the stuff – though in the Note 10’s case all models have 8GB, while the Note 9 is also available with 6GB.

Other features worth highlighting include the S Pen stylus – both phones come with this, but it's had some upgrades for the Samsung Galaxy Note 10, including gesture support.

Both phones have a fingerprint scanner, but while the Galaxy Note 9’s is on the back, the Note 10’s is embedded under the screen.

Both also have IP68 certification (for water and dust resistance), and support Samsung DeX, allowing you to connect the phone to a monitor for a more desktop-like experience.

This is an odd situation, because while usually with these comparisons the new model is a clear upgrade, that’s not the case here.

Yes, the Samsung Galaxy Note 10 has more power, an extra camera lens, an in-screen fingerprint scanner, an improved design, and S Pen improvements, but the Samsung Galaxy Note 9 has a bigger, sharper screen, a bigger battery, potentially more storage, and a microSD card slot, as well as a 3.5mm headphone port, which is lacking on the Note 10.

If you want a phone that’s a clear upgrade in just about every way – although still lacking a headphone port – then it’s the Galaxy Note 10 Plus that you’ll be after, but you’ll have to pay more for that.

As for whether the standard Galaxy Note 10 is an improvement on the Note 9 overall… well, we’ll try and answer that in our full review, but if you can’t wait for that then just consider how much each of the above factors matters to you.