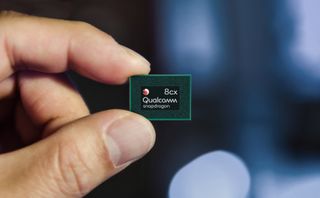 Qualcomm is hardly giving up on its dreams of powering the laptops of the future, having just announced the Snapdragon 8cx system-on-a-chip (SoC) during a press event held in Hawaii. This new SoC was designed exclusively for computers, particularly laptops and tablets, and intends to right a lot of the wrongs done by Qualcomm’s two previous attempts to bring ARM-based computing to the PC.

For those more accustomed to PC processors, an SoC is exactly how it sounds: nearly an entire system’s worth of computing technologies crammed into a single chip. That includes not only compute cores but also graphics cores, in this case, an LTE modem and a special processor for machine learning tasks, the Hexagon 685 digital signal processor (DSP).

This is Qualcomm’s big moment, its third chance to truly nail applying silicon manufacturer ARM’s processor architecture to the PC space. And while we don’t know yet how it will fare in real-life applications ­­­­­– we have yet to complete our review of the Samsung Galaxy Book S, the first laptop to rock the Snapdragon 8cx chipset – we expect to see marked improvements in both performance and battery life from this SoC, as Qualcomm promises.

Here’s everything we know so far about the Qualcomm Snapdragon 8cx.

Processor. First of all, the most important thing to know about the Snapdragon 8cx SoC is that it holds the first 7-nanometer (nm) processor to be released for laptops and Windows tablets: the octo-core Kryo 495.

Specifically, the Kryo 495 CPU comes with a larger memory cache than previous generations, though Qualcomm has yet to say just how much larger it is.

Regardless, this should deliver improvements in multi-tasking, according to the company.

One piece of the Kryo 495 that Qualcomm has been mum on is the clock speed or frequency, measured in hertz. However, we do know that the processor is, of course, based on manufacturer ARM’s big-little compute system – upon which the 8cx is built – that packs both high-density and low-density cores for different tasks.

However, we know much more about what this processor enables in terms of supporting technologies. That includes up to 16GB of 8-channel DDR4 memory, NVMe solid-state drive (SSD) storage – the fastest standard available in laptops – and UFS 3.0 (a hybrid storage format between NVMe SSDs and eMMC). Finally, 8cx at last supports Gen 2 USB-C 3.1 and the third-generation PCIe connection format for compatibility with all the latest peripherals and components.

Graphics. On the other hand, Qualcomm has a lot more to say concerning its new-and-improved graphics processor: the Adreno 680 GPU. Right off the bat, we know that this version is twice as powerful as the earlier version used for laptops, the Snapdragon 850 – not to mention, 3.5 times as much as the Snapdragon 835, the first of its kind to be used in a laptop.

Qualcomm is also proud to declare the Adreno 680 60% more power efficient than the GPU inside the Snapdragon 850. That, coupled with the efficiency increases of the CPU, is anticipated to drive longer battery life, but more on that in a bit.

The Adreno 680 also holds twice as many transistors and twice as much memory bandwidth as the previous generation. Qualcomm’s GPU also supports the latest DirectX 12 framework from Microsoft for improved rendering.

Finally, this GPU delivers multiple improvements to general visuals, like a high-efficiency video encoder, support for the latest H.265 video codec used across the web, 2nd-generation HDR support for real-time color correction, and the bandwidth for up to two connected 4K HDR monitors.

Connectivity. The 8cx uses an entirely new modem from Qualcomm for LTE, Wi-Fi and Bluetooth connectivity: the X24 LTE Modem. Over LTE, this modem allows download speeds of up to 2 Gbps (up to 316 Mbps uploads), and Qualcomm promises up to 70% better throughput in poor network conditions.

The modem also supports a gaggle of cellular connection protocols, including GSM, CDMA, EV-DO and both LTE FDD and LTE TDD – among several others.

Of course, this modem allows for the Connected Standby mode that’s central to the Always Connected PC initiative.

Also included in the modem is support for up to 802.11ad Wi-Fi, which includes AC, with MU-MIMO for managing multiple connections and multi-gigabit speeds. Finally, Bluetooth 5 as well as near-field communication (NFC) are supported.

Battery life. Unfortunately, for as much as Qualcomm is shouting about the various boosted capabilities found within 8cx, it hasn’t said much about longevity beyond that it can deliver ‘multi-day battery life.’ This is more than likely due to the fact that so much of battery life figures depends on the device at hand.

That said, we’ve scoped that Qualcomm has rated the 8cx for up to 20 hours of continuous connectivity over LTE. So, while we don’t know much more in specific, it would be safe to expect laptops that can last upwards of 20 hours when this SoC releases in 2019.

Unfortunately, Qualcomm hasn’t given an actual release date for Snapdragon 8cx. That said, the Samsung Galaxy Book S, the first laptop to rock the Snapdragon 8cx chipset, is slated for a post-summer release. The US version will be released in autumn, while the global version will come out in September

This likely means that the Snapdragon 8cx is already shipping and will start showing up in other devices soon. It would be safe to expect to see Snapdragon 8cx make its debut within a few laptops and Windows tablets that were showcased at this year’s CES.

To be frank, the Snapdragon 8cx will only be as impressive as the hardware that envelops it. If we’re looking on the bright side, device makers have set a low bar to surpass, judging by the first-ever Snapdragon Windows devices. So, here are some laptops we hope to see with the 8cx inside.

Asus NovaGo. This gem from Asus held the promise of an LTE-connected notebook for the price of most other mid-range laptops. While it technically delivered on that, the build quality was questionable and the performance was poor, to say the least. We’d love to see Asus and Qualcomm go back to the drawing board on this one with 8cx inside.

HP Envy. The Envy x2 from HP came with the Snapdragon 835 as an option, which was ultimately its downfall. The Snapdragon 835 simply couldn’t offer the performance required, despite its luxury trappings within an otherwise excellent tablet. HP and Qualcomm wouldn’t have to do much to elevate this Snapdragon Windows tablet to the next level.

Lenovo Yoga. The Yoga C930 from Lenovo just debuted in late 2018 with the Snapdragon 850 inside. While we’ve yet to go in-depth with the laptop, surely introducing 8cx would only make this laptop more capable and powerful. We wouldn’t expect to see a successor to this one until late 2019, sadly.